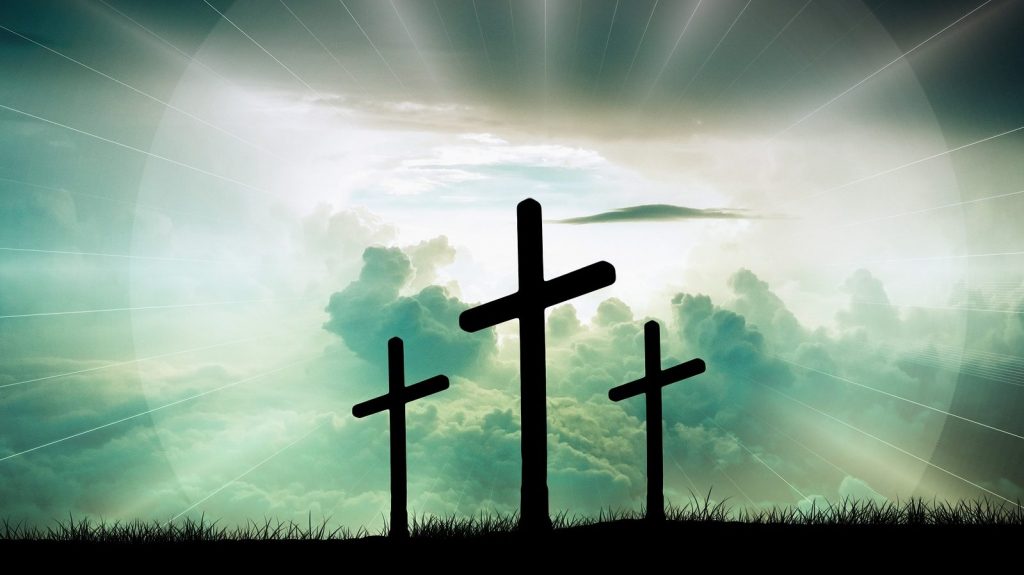 How Is Christianity Different from Other Religions? (Genesis 22:7-8)

How Is Christianity Different from Other Religions?

Christianity is the opposite of other religions, and the main difference is contained in a few profound words Abraham spoke to his son, Isaac:

Christianity Is Different from Other Religions Because God Provided the Sacrifice

Propitiation is a wonderful word, but it lacks use in the English language and, unfortunately, is even removed from some Bible versions. Propitiation is a two-part act that involves 1. turning away the wrath of an offended individual and 2. being reconciled to the person as a result. Close synonyms are appeasing, expiating, placating, and satisfying.

In other religions, man accomplishes the propitiation through the sacrifice he provides, but in Christianity, God accomplished the propitiation through the Sacrifice He provided. His wrath was turned away from believers because it was poured out on His Son. We are reconciled to God because of what He did for us: “When we were enemies we were reconciled to God through the death of His Son” (Romans 5:10a). Thus, the four times the New Testament uses the word propitiation it refers to what God did for man, and not what man does for God:

Only God could provide a perfect sacrifice that would appease Him. Isaiah 53:11 says, “He shall see the labor of His soul, and be satisfied.” The “labor” refers to Jesus’ suffering on the cross, and it “satisfied” God.

In Hebrews 10:5, Jesus said, “Sacrifice and offering You did not desire, but a body You have prepared for Me.” God did not desire the sacrifices and offerings in the Old Testament, but Jesus’ perfect, sinless “body” could appease Him. As the lyrics of “In Christ Alone” state, “‘Til on that cross as Jesus died, the wrath of God was satisfied.”

To go a step further, not only did God provide the Sacrifice, He became the Sacrifice. If we made propitiation for our sins, it would be about us and what we did for God. We could proudly take credit for our salvation. With God accomplishing the propitiation from beginning to end—providing and becoming the sacrifice—it is about Him and what He has done for us. He receives the praise and honor.

The Tower of Babel—A Picture of False, Works-Based Religions

The Tower of Babel was the first organized rebellion against God:

Then they said to one another, “Come, let us make bricks and bake them thoroughly… Come, let us build ourselves a city, and a tower whose top is in the heavens; let us make a name for ourselves, lest we be scattered abroad over the face of the whole earth.”

In false religions, people reach up to God offering sacrifices that amount to nothing. They spend their lives piling one brick on top of another, but they do not get any closer to heaven than the people who constructed the Tower of Babel. Three times they said, “Let us,” and their pride and self-focus is revealed through their desire to “make a name for [themselves]” versus God:

But the Lord came down to see the city and the tower which the sons of men had built. And the Lord said, “Indeed the people are one and they all have one language, and this is what they begin to do; now nothing that they propose to do will be withheld from them. Come, let Us go down and there confuse their language, that they may not understand one another’s speech.”

This is a dramatic reversal! Man said, “Let us build [to] the heavens…” but then God said, “Let Us go down…” referring to all three Persons: God the Father, God the Son, and God the Holy Spirit. The language of God “coming down” is a theme throughout the Old Testament:

The description of God coming down is not as literal as it sounds. God did not leave heaven to see what was happening at the Tower of Babel, Sodom and Gomorrah, or when Israel was in Egypt as though He did not know. This language shows God’s interest and intervention in man’s affairs. This is another difference revealing why Christianity is the opposite of other religions. False gods are often aloof, stoic, and uninterested in man’s affairs. The God of the Bible is deeply concerned and involved.

Examples of God “coming down” take place soon after Israel was delivered from Egypt. He came down to Sinai:

Much of the language describes God as a man: “stood/standing at the door… talked with Moses.” We are even told God spoke to Moses “as a man.” This is anthropomorphism or ascribing human attributes to God. Other examples include God remembering (Genesis 8:1), smelling (Numbers 15:3), stretching out His hand (Psalm 136:12), making His face shine on us (Numbers 6:25), and opening His ears to our cries (Psalm 34:15). God does not literally forget and then need to remember, hold people’s hand, or open His ears (as though there are other times He does not hear us). Instead, this language is used to help us relate to God and understand Him better.

This prefigured the incarnation. Jesus not only fulfilled the prophecies of His coming; He also fulfilled the Old Testament anthropomorphic imagery of God being a man and coming down from heaven to earth. The apostle Paul explained it this way:

Though [Jesus] was in the form of God, He did not count equality with God a thing to be grasped, but emptied Himself, by taking the form of a servant, being born in the likeness of men. And being found in human form, he humbled himself by becoming obedient to the point of death, even death on a cross.

It is not just that Jesus came from heaven to earth; it is how He came. The Greek word for “emptied Himself” is kenoō, which is where we get the theological term, kenosis. When God became a Man in the Person of Jesus Christ, He emptied Himself of certain rights and privileges:

When discussing the kenosis, it is also important to understand what Jesus did not empty Himself of—deity. He did not stop being God. The words “taking the form” reveal an addition, not a subtraction. Jesus did not exchange deity for humanity. He added humanity to deity. He had two natures, human and divine, which are inseparable. He will forever be the God-Man. Not fifty-fifty, but 100 percent God and 100 percent man.

Jesus’ entrance into the world gives credibility and reveals why Christianity is the opposite of other religions. This is not the story man would write. This reveals another difference between Christianity and other religions. Would false gods be born in Bethlehem in a manger to a poor family with no-name parents? Is this how they would make their entrance into the world? Jesus “took the form of a servant.” Would false gods of other religions come and serve? They would be served. Would they stoop down and wash people’s feet? They would have people wash their feet. The Jews, who spent centuries looking forward to their Messiah, struggled with Jesus being the Christ because of His humility.

Paul used ever-increasing terms to describe Jesus as the Lamb that God would “provide for Himself”—Jesus “did not cling to equality with God… He emptied Himself… He became a Man… He was a Servant… He was obedient… even to death” (Philippians 2:6–8). But Paul did not stop at stating Jesus’ death because it is not just that He died. It is how He died—the most shameful, agonizing death imaginable—“even death on a cross.”

This is the bottom rung that God the Father needed His Son to reach for man to be saved; therefore, even at Jesus’ birth, the focus is on His death. Matthew and Luke provide the records, and they do not focus on the world receiving a great teacher, miracle worker, prophet, or even king. Jesus was all these, but the focus is on the world receiving a Savior:

When people think of Jesus, if they fail to see Him as the fulfillment of Abraham’s words—the Lamb “God [provided] for Himself”—they fail to recognize why He came. They fail to see why Christianity is the opposite of other religions.

The Only Son God Recognizes

Three times (Genesis 22:2, 12, and 16), God said Isaac was Abraham’s “only son.” God wants to make sure we do not miss that Isaac was Abraham’s “only son,” but Abraham had another son—Ishmael. Why did God not acknowledge him? He was produced from unbelief instead of faith, and “whatever is not from faith is sin” (Romans 14:23). Ishmael was the result of Abraham and Sarah’s works to fulfill God’s promise, which God would not recognize. Ishmael is a picture of salvation by works—seeking to fulfill God’s promise through human effort. The spiritual application is that as Abraham could not work to receive God’s promised son, we cannot work to receive God’s promised salvation:

Ishmael illustrates working for salvation, and Galatians 4:30 quotes Genesis 21:10 to show he must be removed:

Nevertheless what does the Scripture say? “Cast out the bondwoman (Hagar) and her son (Ishmael), for the son of the bondwoman shall not be heir with the son (Isaac) of the freewoman (Sarah).”

Since Ishmael was not a legitimate son, he could not receive the inheritance. Only Isaac could:

God recognized Isaac because he was the son of faith, and God recognizes us if we are sons of faith: “Therefore know that only those who are of faith are sons of Abraham… For you are all sons of God through faith in Christ Jesus” (Galatians 3:7, 26).

In Genesis 26:3, God told Isaac, “Dwell in this land, and I will be with you and bless you; for to you and your descendants I give all these lands, and I will perform the oath which I swore to Abraham your father.” Isaac was the heir, so he received the inheritance. We are heirs with Christ, so we share in the inheritance:

A Father offered His Son so people can become His sons and daughters. The work has been done. On the cross, Jesus said, “It is finished” (John 19:30). God raised Him from the dead on the third day.

Have you recognized you are a sinner who cannot save himself/herself, and your works are building the Tower of Babel? Please do not finish this book without repenting of your sins and putting your faith in the Lamb God provided. He was willing to receive the punishment your sins deserve, so you would not have to experience that punishment—eternity in hell—yourself.

“This is a faithful saying and worthy of all acceptance, that Christ Jesus came into the world to save sinners, of whom I am chief.”

Questions to Answer in the Comments Section

If you have not repented and put your faith in Christ, what is hindering you? Are you confused or afraid? Do you have questions? If I can help you, please contact me.