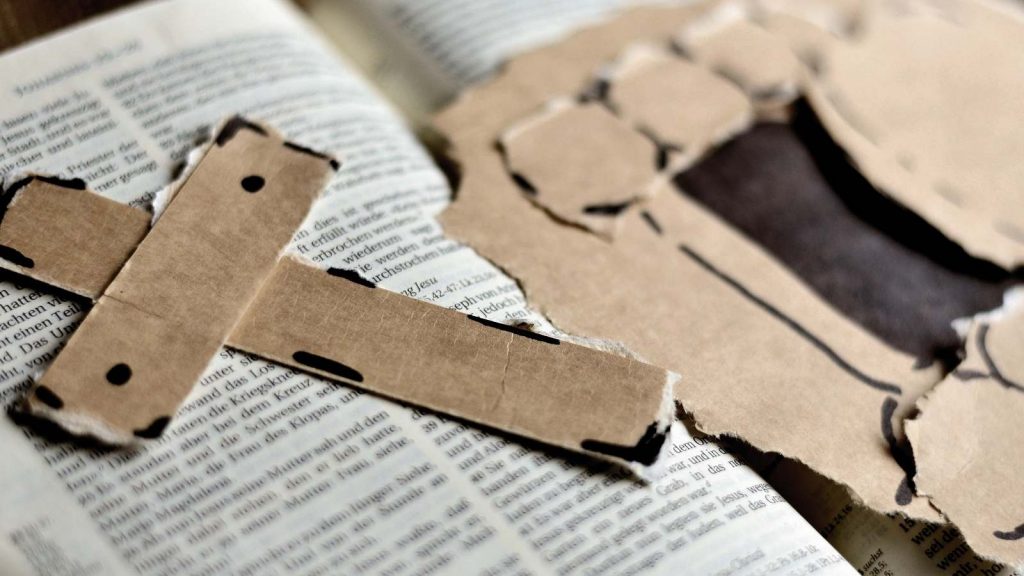 Where Is the Resurrection of Jesus Prophecy in the Old Testament?

There are prophecies the Messiah would be raised from the dead, but where is the resurrection of Jesus prophecy in the Old Testament? Is there an Old Testament prophecy of resurrection on the third day? Read or listen to this chapter from A Father Offers His Son for answers.

Psalm 16 is a messianic psalm, which means that even though David wrote it, we can read it as though Jesus is speaking. In verse 10, he says, “For You will not leave my soul in Sheol, nor will You allow Your Holy One to see corruption.” Peter quotes this verse in Acts 2:27, and Paul quotes it in Acts 13:35 as prophecies of Jesus’ resurrection. Isaiah 53:10 also prophesies of Jesus’ resurrection:

Yet it pleased the Lord to bruise Him;
He has put Him to grief.
When You make His soul an offering for sin,
He shall see His seed, He shall prolong His days,
And the pleasure of the Lord shall prosper in His hand.

Jesus did not have physical children (seed), but He has spiritual children. Isaiah says He will see these children after He has been killed—“bruised… put to grief… [made] an offering.” Jesus would die, but the Father would “prolong His days,” referring to His resurrection.

The difficulty with the resurrection is the New Testament does not quote any Old Testament verse identifying the prophecy that it would take place on the third day. Is it possible there is no such prophecy? No:

Jesus said, “It is written” in the Old Testament that He would “rise [on] the third day.” Paul said “the Scriptures” prophesied, not just that Jesus would be raised, but on “the third day.” Where is this prophecy? There are three possibilities.

Jonah Is a Resurrection of Jesus Prophecy in the Old Testament

The Book of Jonah was written about 760 BC. Almost eight centuries before Jesus was born, Jonah served as an amazing “sign” of His death, burial, and resurrection. When the religious leaders asked for a sign in Matthew 12:39-40, Jesus rebuked them saying:

Jesus said Jonah served as a “sign” of His death, burial, and resurrection.

Jonah 1:17 says: “The Lord had prepared a great fish to swallow Jonah. And Jonah was in the belly of the fish three days and three nights.”

The language takes our minds to the New Testament where the same words are used of Christ. Jonah “died” when the fish swallowed him.

He was “buried” while in the fish. The imagery in the verses is so strong you could almost wonder if Jonah is alive or dead. For example, Jonah 2:2 records:

And he said: “I cried out to the Lord because of my affliction, and He answered me. Out of the belly of Sheol I cried, and You heard my voice.”

We would expect Jonah to say, “Out of the belly of the fish I cried,” but he said he was in Sheol. Sheol is not heaven or hell. Instead, it is the temporary abode of the dead until people are resurrected to their eternal homes in heaven or hell. The Greek New Testament parallel is Hades, which makes the typology with Jesus very strong because Jesus was in Hades while He was buried: “[David] spoke concerning the resurrection of the Christ, that His soul was not left in Hades, nor did His flesh see corruption” (Acts 2:31). Continuing the burial imagery, Jonah 2:6 says:

“I went down to the moorings of the mountains;
The earth with its bars closed behind me forever;
Yet You have brought up my life from the pit,
O Lord, my God.”

You would expect Jonah to say the water closed behind him, but instead, he says, “the earth.” This is not the language of burial in the ocean. This is the language of burial in the ground. The pit is a synonym for Sheol and Hades, and Jonah expected to be “brought up,” or raised, from the pit. He looked forward to his resurrection, just like Jesus looked forward to His resurrection! Jesus said, “You will not leave my soul in Hades, nor will You allow Your Holy One to see corruption” (Acts 2:27).

Jonah Was “Raised” on the Third Day

So the Lord spoke to the fish, and it vomited Jonah onto dry land.

When Jonah came out of the fish, he probably felt like he came back from the dead and was given new life. Like Jesus, Jonah was “buried” for three days and three nights, and he might serve as a prophecy of Jesus’ resurrection on the third day.

Hosea Contains a Resurrection of Jesus Prophecy in the Old Testament

And like a young lion to the house of Judah.
I, even I, will tear them and go away;
I will take them away, and no one shall rescue.
I will return again to My place
Till they acknowledge their offense.
Then they will seek My face;
In their affliction they will earnestly seek Me.”

These words sound harsh, but they serve the beautiful purpose of turning Israel back to God. The people respond in Hosea 6:1-2:

Come, and let us return to the LORD;
For He has torn, but He will heal us;
He has stricken, but He will bind us up.
After two days He will revive us;
On the third day He will raise us up,
That we may live in His sight.

The words about being “[raised] on the third day” take our minds to Christ. Although these verses discuss Israel, the complete fulfillment is in Jesus. He is the ideal Israel according to Isaiah 49:3:

And He said to me,
“You are My Servant, O Israel,
In Whom I will be glorified.”

The New Testament shows these verses about Israel serve as prophecies of Jesus. Matthew 2:14-15 quotes Hosea 11:1:

When he arose, he took the young Child and His mother by night and departed for Egypt, and was there until the death of Herod, that it might be fulfilled which was spoken by the Lord through the prophet, saying, “Out of Egypt I called My Son.”

These verses about Israel look forward to Christ. That is also the case with Hosea 6:2, which goes beyond Israel’s rebirth to Christ’s resurrection. First Peter 1:10–11 loosely says, “all the prophets testified of the sufferings of Christ and the glory that should follow.” They might not have been aware of the future reality of their words, but they are fulfilled in Christ. Regarding “He will raise us up,” Adam Clarke said, “These words are supposed to refer to the resurrection of our Lord. The original, yekimenu, has been translated, ‘He will raise him up.’”[i] The words “may live in His sight” are like Isaiah 53:10, which says, “He shall prolong His days.”

The Veil and Jesus’ Body Torn

The context wonderfully supports Jesus being in view. The words, “I will tear… He has torn” look to Christ’s body “torn” on the cross. When He died, “the veil of the temple was torn in two” (Matthew 27:51). Hebrews 10:20 says we have access to God “by a new and living way which He consecrated for us, through the veil, that is, His flesh.” The veil was a picture of Christ’s body that when “torn” gave us access to God. The words “He has stricken” point to Christ Who was “stricken, smitten by God, and afflicted” (Isaiah 53:4).

The words, “He will revive us… He will raise us up, that we may live in His sight,” are a suitable prophecy because Jesus is the firstfruits of the resurrection (1 Corinthians 15:20-23). There is a close relationship between Jesus and His people, who are called “the body of Christ” (1 Corinthians 12:27). The resurrection of His body is their resurrection: “We shall be [united together with Him] in the likeness of His resurrection” (Romans 6:5).

Isaac Is a Resurrection of Jesus Prophecy in the Old Testament

Genesis 22:4—Then on the third day Abraham lifted his eyes and saw the place afar off.

Genesis 22:4 is not only referring to the day Abraham arrived at Moriah. The verse also identifies the day Abraham received Isaac back from the dead. Hebrews 11:17 says:

By faith Abraham, when he was tested, offered up Isaac, and he who had received the promises offered up his only begotten son…

Twice it says Isaac was “offered up,” drawing a parallel between him and Jesus Who was “offered up for our sins” (Romans 4:25). Second, Isaac is given the same title as Jesus: “only begotten son.” Hebrews 11:18 says:

Of whom it was said, “In Isaac your seed shall be called”…

This quote from Genesis 21:12 identifies Isaac as the promised son Abraham’s descendants would come from, as opposed to Ishmael. Hebrews 11:19 says:

Concluding that God was able to raise him up, even from the dead, from which he also received him in a figurative sense.

The words “raise him up, even from the dead,” create the imagery that Isaac was resurrected. When Abraham received the command to sacrifice Isaac, he was so committed to obeying; it was as though Isaac died to him. This was the first day. Abraham reached Mount Moriah “on the third day.” He ascended the mountain to sacrifice his son, and when the Angel of the Lord stopped him, it was as though he “received [Isaac]” back from the dead. This occurred “in a figurative sense,” because Isaac did not physically die.

The Greek word for “figurative” is parabolē, which is related to our English word “parallel.” It means, “a placing of one thing by the side of another, juxtaposition.” Of the fifty times the word occurs in the New Testament, forty-six times it is translated as “parable.” Jesus’ parables were physical stories placed alongside spiritual realities. The physical story of Abraham and Isaac illustrated the spiritual reality of Jesus’ death and resurrection on the third day.