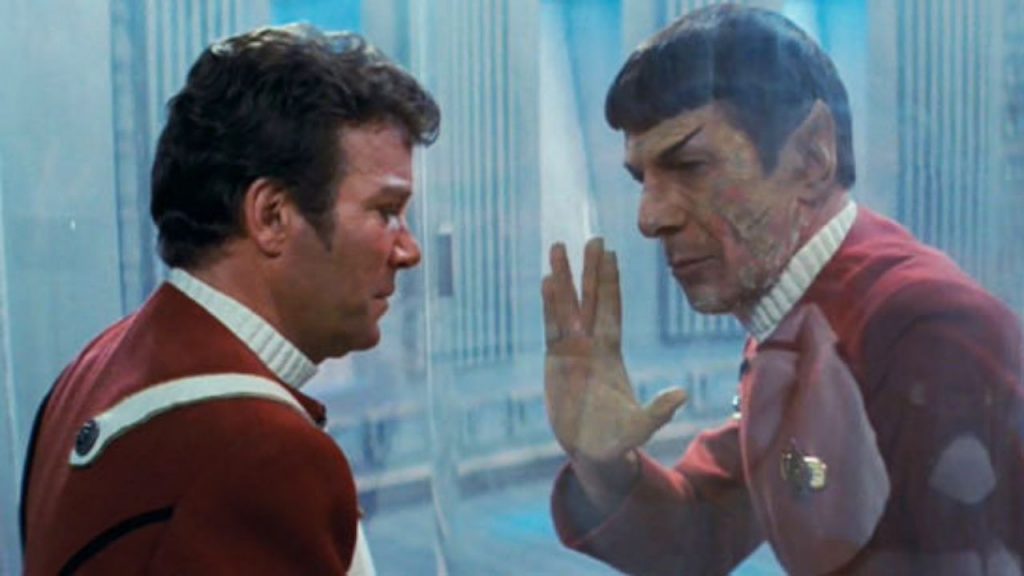 Lessons from Comparing and Contrasting Spock and Jesus

Spock versus Jesus probably doesn’t seem like a very appropriate comparison, but it works. This past week I was watching Star Trek II: The Wrath of Khan while doing cardio. No, I am not, nor have I ever been a Trekkie, but as a kid Star Trek was tied with Superman for my second favorite movie series behind Star Wars. Anyway, we’re going to jump to the end of the movie to get to the part relating to Jesus. Warning: Spoilers ahead!

The Enterprise’s engine was damaged preventing the ship from entering warp speed (aka Star Wars’ lightspeed), which would allow them to escape the explosion from the Genesis Device a dying Khan activated to finally enact revenge on Kirk. With the Enterprise unable to get far enough away from the detonation Kirk and all the crew were killed. Of course, that’s not what happened or else there wouldn’t have been films III, IV, V and VI (although must people wouldn’t mind the absence of The Final Frontier).

With the lives of all the crew in the balance, Spock restored power to the warp drive by entering the nuclear reactor and exposing himself to a lethal amount of radiation. When Kirk realized Spock was gone (by the way, you and your crew are about to die and you don’t notice your brilliant, right-hand Vulcan adviser is missing?) he made his way to the engine room where he saw his friend within minutes of death.

Using his last words to ask Kirk if the ship is out of danger, Spock then famously says, “The needs of the many outweigh…” which Kirk interrupts, showing he’s learned from his logical friend throughout their relationship, “…the needs of the few…” and Spock continues, “Or the one. I have been and always shall be your friend.” Then making the Vulcan salute, which Kirk mirrors from the other side of the glass that protects him from radiation, Spock utters, “Live long and prosper.” To Kirk’s grief, his friend expires. Don’t worry, Spock only stays dead until the beginning of Star Trek III: The Search for Spock.

Khan was consumed with hatred toward Kirk that led to his death and the deaths of his friends and family. Khan is a great example of the danger of bitterness and its destructive potential for any involved:

Beware that any root of bitterness grow up to cause trouble and defile many.

Spock sacrificed his life for his friends. He was willing to die that they might live:

Greater love has no one than this, than to lay down one’s life for his friends.

Spock looks like Jesus and the typology is continued into the next movie where Spock comes back to life. There’s even an empty coffin complete with burial clothes paralleling Jesus’ empty tomb and burial clothes.

Lesson Three: Christian themes were borrowed, without being Christian.

There are clear allusions to Jesus, but there’s no Gospel. Nobody is going to come to salvation through watching this movie. It’s sort of like, “We’ll use what we want from Christianity, but we aren’t Christians and we aren’t really concerned about people becoming Christians. We’ll give a nod to Jesus, but mostly to increase ticket sales.”

This is the most popular of the Star Trek series, and I’m sure much of the success relates to the dramatic and touching ending. I was having trouble doing cardio because I was crying so hard.

Actually, that’s not true at all, and here’s why: what Spock did paled in comparison to what Jesus did. If people like this movie, and history definitely shows that to be the case, they should find what Jesus did to be infinitely more touching. I think when you come to faith in Jesus and the sacrifice He made, nothing compares. Even “touching” movies like this seem silly.