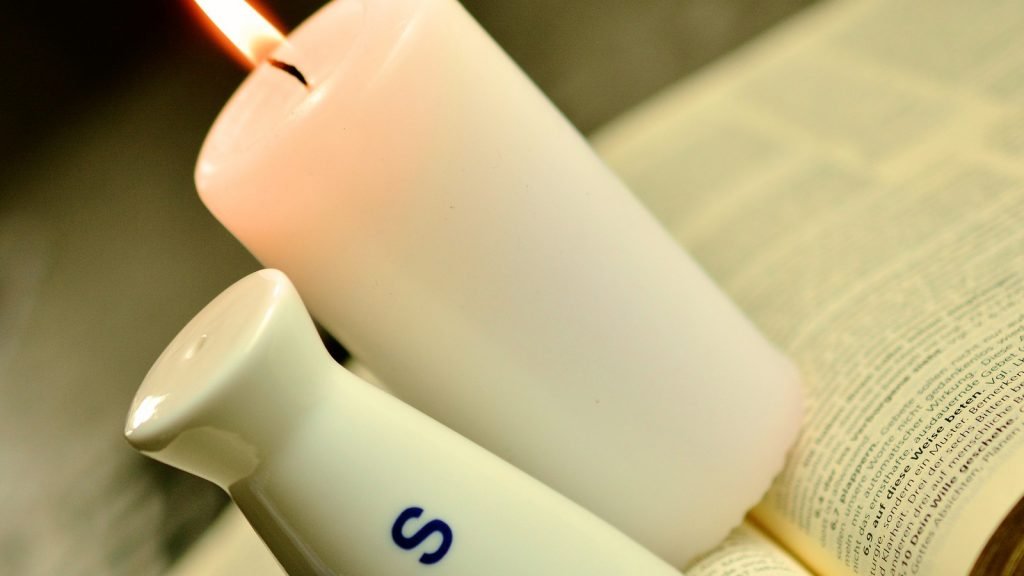 How Are Believers “Salt and Light”?

“You are the salt of the earth; but if the salt loses its flavor, how shall it be seasoned? It is then good for nothing but to be thrown out and trampled underfoot by men.
You are the light of the world. A city that is set on a hill cannot be hidden. Nor do they light a lamp and put it under a basket, but on a lampstand, and it gives light to all who are in the house. Let your light so shine before men, that they may see your good works and glorify your Father in heaven.”

Because Jesus compared believers with salt and light we should ask ourselves why this is a fitting metaphor.

Why Would Jesus Compare Believers with Salt?

Salt was once one of the most valuable commodities on earth. It was traded ounce-for-ounce with gold because of its important uses:

The comparison with believers:

For the mystery of lawlessness is already at work; only He who now restrains will do so until He is taken out of the way. And then the lawless one will be revealed, whom the Lord will consume with the breath of His mouth and destroy with the brightness of His coming.

Why Would Jesus Compare Believers with Light?

The reason Jesus compares believers with lamps is more obvious. God has “made His light shine in our hearts” (2 Corinthians 4:6). This is a light that “should shine before men, so they may see and praise our Father in heaven” (Matthew 5:16).

Salt that isn’t salty and lamps that don’t put off light “are no longer good for anything” (Matthew 5:13). Ouch! One of the main reasons God chose Israel in the Old Testament was to reveal Him to the world. The Church has the same calling today. Compare these verses:

As believers we should understand God has called us to reach out to a fallen, sinful world. There’s an interesting balance:

Be a Jonathan and take that step out. Share your faith. Invite someone to church. See what the Lord will do on your behalf.

Matthew 5:14 says, “You are the light of the world” but sometimes you’ll hear people say something like, “Make sure you’re being the light.” Is there a difference?

The latter is meant to encourage people to make sure they’re putting forth enough effort in their relationships with the Lord. If they’re not working hard enough, there won’t be enough light in the world!

“You are Salt and Light” Is an Indicative, Versus an Imperative

People usually mean well when they tell others to “Be Salt!” or “Be the light,” but there’s one problem: Matthew 5:14 is a not a command.

It might sound like semantics, but there’s a big difference between a statement (an indicative) and a command (an imperative). Since most of us don’t remember all of our 4th grade grammar, it works like this:

There are plenty of commands (or imperatives) in Scripture, but “You are the light” is not one of them. Instead, these words indicate something about believers…versus telling believers to do something.

Are there any really serious problems from making this verse into an imperative instead of leaving it as an indicative? Probably not. But there are minor implications.

Instead of trusting God to work through them, people strive to accomplish as much as possible in their own effort. Instead of ministry accomplished through divine appointments and living and looking like Christ, people wonder how much they have to do in their own strength as opposed to being available and willing to simply walk in the works that God prepared beforehand for us (Ephesians 2:10).

Jesus said, “I am the vine, you are the branches. He who abides in Me, and I in him, bears much fruit; for without Me you can do nothing.”

Jesus’ words contain another indicative. He’s making a statement about those who abide in Him. He’s not telling people to produce fruit and if they don’t they aren’t saved (“in Him”).

The branches on fruit trees aren’t straining to produce fruit. They produce simply by being attached to the tree. That’s Jesus’ point with the verse, that it’s not about some extreme effort in our lives. It’s about us being connected to Him, resting – abiding – in Him daily:

Believers produce these fruit by living like their Savior, and being connected to Him.

The Salt and Light in Joseph, Mary, Simeon, and Anna’s Lives

Now there was a man in Jerusalem, whose name was Simeon, and this man was righteous and devout, waiting for the consolation of Israel, and the Holy Spirit was upon him. And it had been revealed to him by the Holy Spirit that he would not see death before he had seen the Lord’s Christ. And he came in the Spirit into the temple, and when the parents brought in the child Jesus, to do for him according to the custom of the Law, he took him up in his arms and blessed God.

And there was a prophetess, Anna, the daughter of Phanuel, of the tribe of Asher. She was advanced in years, having lived with her husband seven years from when she was a virgin, and then as a widow until she was eighty-four. She did not depart from the temple, worshiping with fasting and prayer night and day. And coming up at that very hour she began to give thanks to God and to speak of him to all who were waiting for the redemption of Jerusalem.

God orchestrated everything through Joseph and Mary’s obedience. They were at the temple fulfilling their obligations under the Law, and God used that to bring them into contact with Simeon and Anna. Their obedience provided the opportunity for these meetings to take place. It should encourage us to trust that when we’re obeying God He’s going to orchestrate events and situations in our lives.

Joseph and Mary weren’t trying to set up these meetings. They were only focused on obeying God. How many times have I tried to make something happen? Sometimes I’m tempted to try to manipulate circumstances instead of simply resting in God and letting Him work through my obedience. I feel like I need to help. I end up striving when all I really need to do is trust and leave the results up to God. He doesn’t need my striving or help. Part of walking by faith is just saying, “Lord, I’m going to live my life and let you take care of things. I’ll focus on resting let You focus on everything else.”

The Worst Problems Occurred When I Didn’t Rest

Interestingly some of the most trouble I’ve had in my life after becoming a Christian has taken place when I’ve taken control. I’ve had problems when I thought I knew what was best. I thought I could bring about the best outcome instead of letting God do it. Those are times I didn’t walk by faith. Hebrews 11:6 says, “It is impossible to please God without faith.” No matter what I do, no matter how great it looks, if it’s not done in faith it’s not pleasing to God.

I’m sure if I would’ve focused on being “salt and light” God would’ve taken care of everything else. I probably would’ve saved myself some unnecessary frustration, while also being able to experience the blessings God put in Joseph, Mary, Simeon, and Anna’s lives.

Discussion Questions About Salt and Light

PrevPreviousWhy Did Jesus Call a Woman a Dog?
NextShould We Gather for Worship on Saturday or Sunday?Next