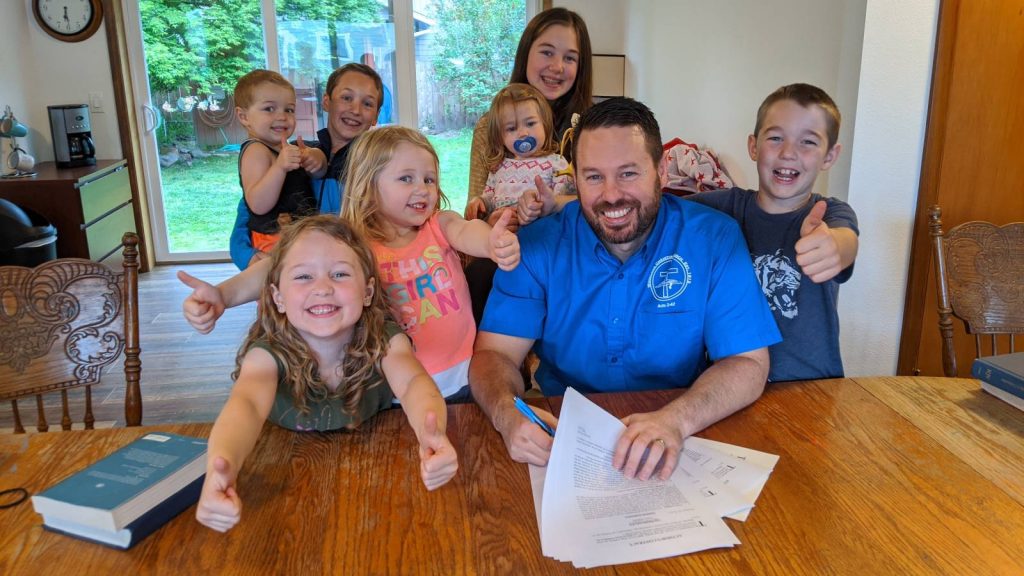 In October 2019 I took my first step toward traditional publishing when I signed with The Blythe Daniel Agency. Now I’ve taken another step by signing with Harvest House Publishers.

In December 2019 Blythe pitched my proposal to many publishers. She told me to expect to wait months to hear anything, but within a month of sending my proposal and sample chapters, something dramatic happened. An editor at Harvest House Publishers told Blythe he and his wife wanted to meet with Katie and me since they would be in the area.

The four of us met on January 20th in Portland and it went wonderfully. Although we spoke for hours, it felt like a few minutes. I could share about the technical side of the discussion, but I think it would be boring. Instead, I’ll stick with two highlights.

I was speaking with an author friend who publishes with a medium-sized publisher. I asked him why he didn’t try to publish with a large publisher. He said that to publish with some of them would mean “selling his soul,” because of their business practices and books they publish.

I never forgot this sentiment so every time a publisher showed interest, I’d research their site, books, and anything else I could find out about them. Prior to the meeting with the editor and his wife, I tried to learn everything I could about Harvest House Publishers. The editor told me to come to the meeting with any questions I had. Maybe he thought I was trying to interview him versus the other way around. Even if that was the case, they were very gracious in answering all my questions, including those that alleviated any concerns I had.

Spiritually speaking, I was impressed both with Harvest House Publishers and the editor and his wife. I shared my conservative views, figuring it would be better to scare them away now versus later, but they were agreeable.

I knew Bob Hawkins, Sr founded Harvest House Publishers in 1974 and passed the business on to his son, Bob Hawkins, Jr. I liked that Harvest House was a family-owned business, because perhaps that meant their authors become part of the family. Some authors have books with multiple publishers, but I shared with the editor that I’d love to have a long-lasting relationship with the same publisher.

I hoped to get to know the team that published my book(s), develop a relationship with them, and work with them for the long-term. Their investment in me would be an investment in future books with them and vice versa. I thought it would be easier for both sides to continue working together, versus having to change relationships and learn new people.

The editor thought this was fantastic too. Harvest House Publishers is located only about two hours south in Eugene, Oregon. If I became one of their authors, we discussed me visiting with my family.

From Encouraging to Discouraging with Harvest House

The meeting with the editor was only one month after pitching the proposal, which was encouraging considering I expected to wait much longer before hearing anything. But after this meeting things drastically slowed down. Blythe said it was unusual for editors to meet with authors before signing them, because all communication typically takes place between the publishing house and agent as the publishing team considers the author’s presentation; therefore, when my meeting with the editor concluded, I didn’t communicate with him further.

Weeks passed before the editor was able to meet with the Harvest House team. When they met, he wrote Blythe that the presentation went well. Then more waiting, another meeting, and a pandemic.

The Coronavirus made things even more uncertain. As I read about the effect on publishing houses, I learned that some were rejecting all proposals and delaying the publication of scheduled books. It wouldn’t be too much to say that pitching a book to publishers during a worldwide shutdown is the worst timing imaginable.

While I believed God was in this, more rejections came from other publishers and each one tempted me to doubt myself, my work, and this direction. Katie has repeatedly reminded me that my daily prayer with my family was for God’s will. Despite my excitement about the possibility of signing with Harvest House or another publisher, I tried to hold it loosely. I asked God to close all doors with traditional publishers, including Harvest House, if He wanted me to keep self-publishing.

The Offers from Harvest House

Now to him who is able to do far more abundantly than all that we ask or think, according to the power at work within us.

The three times I feel like God fulfilled this verse in my life are when:

Blythe said that first-time traditionally published authors typically receive contracts for one book, but she was hoping to receive an offer for the book we pitched and possibly a second book. Considering everything going on with the Coronavirus, a one-book deal would’ve been great.

On April 3rd I received an email from Blythe with the subject line, “Congratulations! Offers from Harvest House.”

The first sentence was, “Wow, Scott, this is incredible! I’m so happy for you!”

Harvest House Publishers wanted to sign me to a three-book deal. Then Blythe asked if they’d be interested in a fourth book to complement the third and they agreed. If one book would’ve been great, and two books would’ve been amazing, I didn’t have words for a four-book deal. My prayer has been, “Thank you Lord. I feel like You did this. I don’t know why, and I don’t deserve it, but I hope you use me for Your glory.”

God’s Effort Versus Mine

Moses saw an Egyptian beating a Hebrew. He looked this way and that, and seeing no one, he struck down the Egyptian and buried him in the sand. When Pharaoh heard of it, he sought to kill Moses. But Moses fled from Pharaoh and stayed in the land of Midian.

In Moses’ best effort all he could do was bury one Egyptian and it caused problems. When God was in charge He was able to use Moses to bury the entire Egyptian army in the Red Sea.

In my best effort, I sent numerous query letters and could barely get a response, say nothing about a publisher. I give God all the credit. He got me signed with the literary agent of the year without sending one query letter, and contracts for four books with a fantastic publisher.

God has also graciously provided encouragement from elsewhere, such as messages from people telling me God used my books in their lives, or my church family asking how the next book is going. Most recently I shared this news with the other elders and their wives, and Katie and I couldn’t have asked for better responses. They were all very supportive of what God’s doing.

I will probably still do some self-publishing.

Harvest House is going to republish my marriage book as You Marriage God’s Way, and provide an accompanying workbook.

They will be published around September 2021, but you can preorder them now.

In June 2021, I give two more manuscripts to Harvest House for Your Finances God’s Way and an accompanying workbook. They should be published May 2022.

What can you do?

Most importantly, please pray that God uses my books to exalt Christ and draw people to Him.

Thank you for being part of my life and letting me be part of yours.