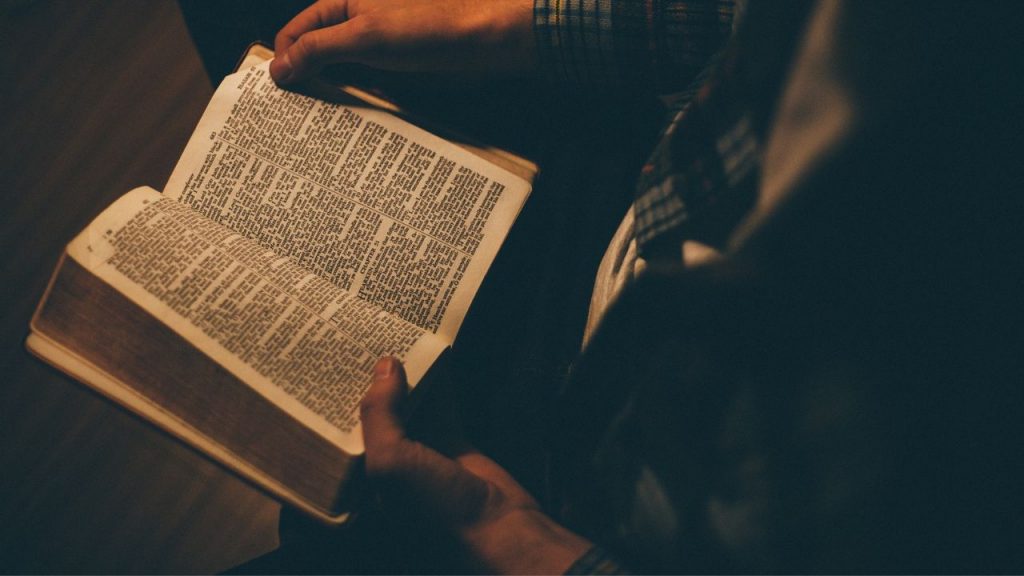 What Do Bible Verses About Money Teach Us?

What do Bible verses about money teach us? Do the Scriptures on money say it is moral, immoral, or amoral? Read or listen to this chapter from Your Finances God’s Way for answers!

During college, I took a world religions class. A Buddhist monk was brought in as a guest speaker. He had no modern-day luxuries, such as a vehicle, computer, or refrigerator, because he thought these were sinful (immoral). He thought it was good (moral) to allow himself only what was necessary for survival, such as food, water, and shelter.

But this is not what Jesus meant when He said, “If anyone desires to come after Me, let him deny himself, and take up his cross daily, and follow Me” (Luke 9:23). There, Jesus referred to denying ourselves immoral pleasures, but the monk was abstaining from things that are amoral (non-sinful, or spiritually neutral):

If you died with Christ from the basic principles of the world, why, as though living in the world, do you subject yourselves to regulations—“Do not touch, do not taste, do not handle,” which all concern things which perish with the using—according to the commandments and doctrines of men? These things indeed have an appearance of wisdom in self-imposed religion, false humility, and neglect of the body, but are of no value against the indulgence of the flesh.

When people rigorously neglect the amoral and follow legalistic, man-made commands, there’s “an appearance of wisdom,” but there’s “no value against [indulging] the flesh,” which is to say there’s no spiritual benefit. It’s heartbreaking when people spend years rigorously denying themselves in ways that have no moral or spiritual benefit.

The Bible teaches that drunkenness and homosexuality are immoral (1 Corinthians 6:9-10). It’s tragic when people spend years getting drunk or participating in homosexual relationships because they’re convinced their immoral actions are amoral.

We must understand morality because if we don’t, we might find ourselves in one of the above situations and fail to see the goodness (morality) of certain behaviors and the sinfulness (immorality) of others.

These are the two mistakes we typically make with morality. Let’s consider them in more detail so we’ll be prepared to view our money correctly.

Mistake 1: Thinking Something Is Amoral When It Is Moral or Immoral

Many verses discuss the morality of our words. For example:

Most people know their speech is moral, but they might not know that the amount they speak (and listen) is also moral (versus amoral). James 1:19 says, “My beloved brethren, let every man be swift to hear, slow to speak, slow to wrath.” This verse contains three commands, which means we’re dealing with morality: it is moral to be quick to hear, slow to speak, and slow to anger; and it is immoral to be slow to hear, quick to speak, and quick to anger. Anger and listening might be mentioned together because they’re closely related. As a pastor, when I’m counseling couples, sometimes it’s obvious early on who’s more at fault when problems arise because they’re slow to hear and quick to get angry.

Ecclesiastes teaches that one way to identify fools is they talk too much: “A fool’s voice is known by his many words…a fool also multiplies words” (Ecclesiastes 5:3; 10:14). David took so seriously how much he spoke that he prayed God would protect his mouth: “Set a guard, O Lord, over my mouth; keep watch over the door of my lips” (Psalm 141:3).

Proverbs is filled with contrasts between wise and foolish people. One of the contrasts is wise people listen, but foolish people babble on: “The wise in heart will receive commands, but a prating fool will fall” (Proverbs 10:8; see also Proverbs 10:19; 13:3; 17:27-28).

Mistake 2: Thinking Something Is Immoral When It Is Amoral

Certain foods are healthier or unhealthier than others, but spiritually they’re not better or worse than other foods: “Food does not commend us to God; for neither if we eat are we the better, nor if we do not eat are we the worse” (1 Corinthians 8:8; see also Matthew 15:11; Mark 7:18; Acts 10:15; Romans 14:17; Colossians 2:16-23). Food is amoral, but our relationship to it is moral. We can commit the sin of gluttony, or, on the other side of the spectrum, the sins of anorexia and bulimia. God doesn’t care what we eat, but He cares how much we eat.

Other people used their knowledge immorally in detrimental ways to humanity:

What does all of this have to do with our finances? Good question! People make these same mistakes with money. First, they think the way they spend money is amoral when, in fact, every purchase is either moral or immoral. Second, they think money is immoral when it is amoral.

Bible Verses About Money Teach Us Money Is Amoral

Because money is amoral, having more or less of it is not good or bad. The rich and poor are made in God’s image, and therefore they have equal value: “The rich and the poor have this in common, the LORD is the maker of them all” (Proverbs 22:2).

You could look at this list of wealthy people and say, “They’re rich, but we don’t know that God wanted them to be rich. Maybe God wanted them to be poor, but they disobeyed Him!” The problem is we’re told God gave them riches, which we wouldn’t read if riches were immoral. Genesis 13:2 says, “[Abraham] was very rich in livestock, in silver, and in gold.” In the Abrahamic Covenant in the previous chapter, God said, “I will make you a great nation; I will bless you and make your name great, and you shall be a blessing” (12:2). Part of the blessing was wealth. Proverbs 10:22 says, “The blessing of the Lord makes one rich, and He adds no sorrow with it.” Sometimes God blesses people with riches, and when He does, nothing negative accompanies it.

When Solomon replied that he wanted an understanding mind so he could better govern the people of Israel, God said, “Because…you have not asked for possessions, wealth, honor, or the life of those who hate you, and have not even asked for long life…wisdom and knowledge are granted to you. I will also give you riches, possessions, and honor, such as none of the kings had who were before you, and none after you shall have the like” (2 Chronicles 1:11-12 ESV). After Job’s suffering ended, “The Lord blessed the latter days of Job more than his beginning. And he had 14,000 sheep, 6,000 camels, 1,000 yoke of oxen, and 1,000 female donkeys” (Job 42:12). This is rich, whether in the ancient world or ours.

Solomon, Hannah, and David saw wealth coming from God: “Every man to whom God has given riches and wealth…a man to whom God has given riches and wealth and honor, so that he lacks nothing for himself of all he desires” (Ecclesiastes 5:19; 6:2); “The LORD makes poor and makes rich” (1 Samuel 2:7); and “Both riches and honor come from You, and You reign over all” (1 Chronicles 29:12). God also gives the ability to obtain riches: “You shall remember the LORD your God, for it is He who gives you power to get wealth” (Deuteronomy 8:18). Would God do this if money was immoral?

Although, before you start thinking that being rich is good, or moral, consider that some of the greatest men in Scripture were also poor, including our Lord: “Though He was rich, yet for your sakes He became poor, that you by His poverty might become rich” (2 Corinthians 8:9). Jesus said, “Foxes have holes, and birds of the air have nests, but the Son of Man has nowhere to lay His head” (Matthew 8:20). Jesus lived in such poverty during His earthly ministry He didn’t even have a bed. The apostles followed His example: “Peter said, ‘See, we have left all and followed You’” (Matthew 19:27).

Clearly, being rich or poor is not moral or immoral, righteous or sinful, because money is amoral. But what we do with money, and the way we feel toward it is moral. Let’s consider these two important truths in detail.

How We Spend Money Is Moral

Money, like other possessions, such as homes or vehicles, is a resource we can use honorably or dishonorably. Regardless of how much or little money we have, every cent we spend is moral or immoral.

We can spend money morally by caring for our families, blessing others, and giving to the church. We can spend money immorally if we buy something ungodly, support something sinful, or satisfy our covetousness. James Moffatt said, “A man’s treatment of money is the most decisive test of his character—how he makes it and how he spends it.”1

We can tell what our priorities are by looking at our checkbook and calendar. They reveal what we do with two of our most valuable assets: our money and time. The way we spend these reveals much about our morality.

How We Feel About Money Is Moral

Our relationship with money, which is to say the way we feel about it, is also moral. Consider how many verses condemn loving money:

Why so many verses warning against loving money? The answer is in these verses:

Those who desire to be rich fall into temptation, a snare, into many senseless and harmful desires that plunge people into ruin and destruction. For the love of money is a root of all kinds of evils. It is through this craving that some have wandered away from the faith and pierced themselves with many pangs (ESV).

Bible Verses About Money Teach Us the Love of Money, Versus Money, Is the Problem

Consider the way the Amplified Bible translates parts of 1 Timothy 6:9-10: “Those who…crave to get rich [with a compulsive, greedy longing for wealth]…the love of money [that is, the greedy desire for it and the willingness to gain it unethically]…” These verses are not about people who say, “It would be nice to be rich.” Instead, they are about people so fixated on riches it controls their lives, and this is the danger.

First, the maxim says money is the cause of all evil in the world, but we’ve already discussed that money itself is amoral. There is plenty of evil that has nothing to do with money. It’s not right to think money is immoral or responsible for evil because that puts the blame in the wrong place. Jesus blamed our hearts: “Out of the heart proceed evil thoughts, murder, adulteries, fornications, thefts, false witness, blasphemies” (Matthew 15:19), and James blamed our flesh: “Each one is tempted when he is drawn away by his own desires and enticed. Then, when desire has conceived, it gives birth to sin; and sin, when it is full-grown, brings forth death” (James 1:14-15). Evil is not birthed from money, but it is birthed from us giving in to temptation.

Second, the maxim makes money the problem, but Paul said, “The love of money is the root of all kinds of evils” (ESV). We should blame our relationships to money, not money itself. We get into trouble when we love money, regardless of how much wealth we have. People can love money whether they’re rich or poor. The poor would love to be rich, and the rich would love to be richer. This should cause us to examine how we feel about money: Do we covet it, dream about it, and obsess over it? These are important questions because the love of money can be, as Paul said, “a snare.”