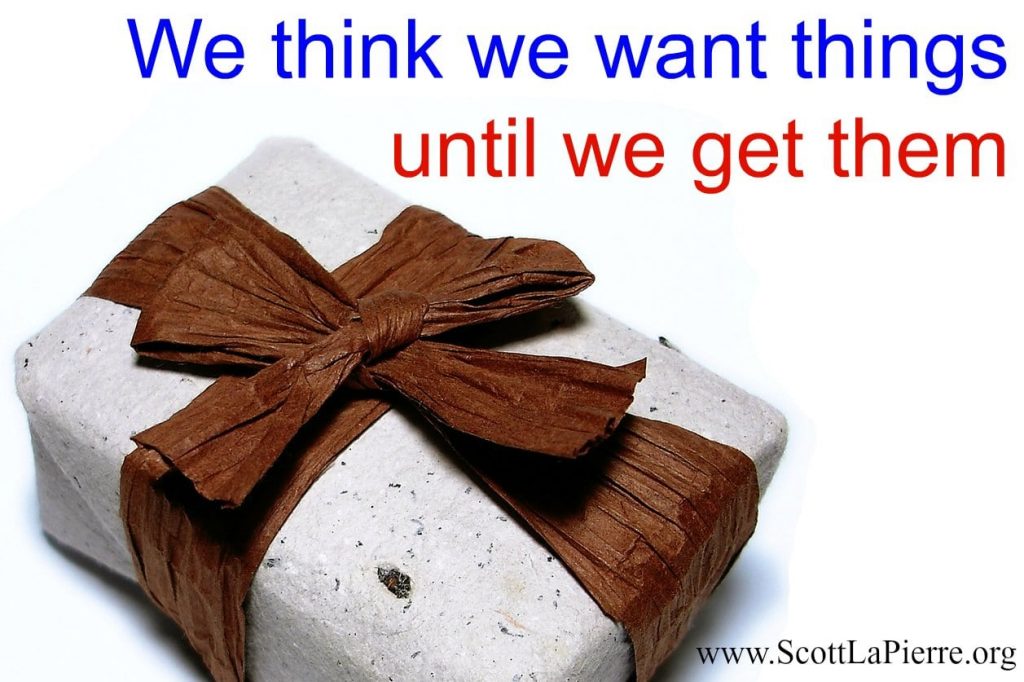 We think we want things until we get them

Through a recent situation our family learned a valuable lesson. We think we want things until we get them. Well, a situation helped us learn this, but more importantly it was some examples in God’s Word.

Nothing against families with pets, but we’ve always sort of felt like animals belong outside. Houses are for people. With the exception of babies, houses aren’t for living things that can’t talk and don’t know where to go to the bathroom. Our kids have asked for pets before and you can probably guess how we responded.

Something happened this past week though: someone offered us a turtle. I might be wrong, but it seemed like there was some discussion about us having a turtle going on BEHIND MY BACK before this offer was made. So when someone said, “Hey, we have a turtle with all the supplies you need to care for it and we’d be happy to give it to you” some people (my wife, Katie) thought this was God’s way of blessing us. But others (me) thought this was not the case, so we had a family Bible study. Through our time together we could see that many times we think we want things until we get them.

Examples from Scripture showing we want things until we get them…

In each of these situations the individuals got what they wanted, but then regretted it later. Often terribly.

God gave the Israelites manna, but that wasn’t good enough for them. They started complaining, “We want meat! All we ever get is this manna! It’s made us lose our appetites.” So God said, “Okay, I’ll give you meat!” God sent quail throughout the camp and the people gathered it day and night. They were excited…at least at first:

God told the people, “You shall eat meat, [not] just one day, or two days, or five days, or ten days, or twenty days, but a whole month, until it comes out at your nostrils and becomes loathsome to you, because you have rejected the Lord who is among you and have wept before him, saying, “Why did we come out of Egypt?”’

While the meat was still between their teeth, before it was chewed, the wrath of the LORD was aroused against the people, and the LORD struck the people with a very great plague.

They ate and were well filled, for God gave them their own desire. They were not deprived of their craving; But while their food was still in their mouths, The wrath of God came against them.

What Happened with the Turtle?

The person who offered us the turtle said, “I want to make sure you know what you’re getting in to; turtles live a long time. It will probably outlast you.”I shared this with my children and told them, “Think about all the work that goes in to taking care of an animal. Also, you might want a turtle now, but will you want it months or years from now?” After thinking about it the kids decided they didn’t want the turtle. I was glad the kids came to this decision, not so much because I was that opposed to them having a turtle, but because I suspected they wouldn’t want it in the near future.

[Israel] lusted exceedingly in the wilderness, And tested God in the desert. And He gave them their request, But sent leanness into their soul.

That really summarizes this whole post. They got what they wanted, but it was leanness for their souls. This is how it often is for us. We want things until we get them. , it’s not God’s best for us, but we keep pushing so He lets us have it. We think it’s going to be enjoyable and satisfying, but it ends up being leanness to our souls.

Discuss: Can you think of a time in your life that supports the lesson that “we want things until we get them”?