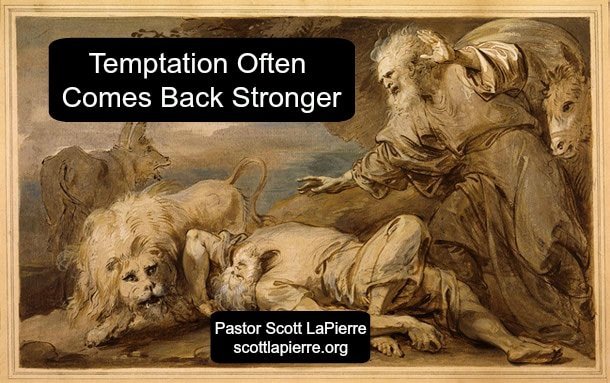 The past two Sundays we’ve been looking at the story of the old prophet and the man of God in 1 Kings 13. Here are the sermons:

In the chapter, God sent a prophet – repeatedly called “man of God” – to confront the idolatry King Jeroboam introduced to the nation (the golden calves in 1 Kin 12:25-33). The Lord told the man of God, “You shall not eat bread, nor drink water, nor return by the same way you came” (1 Kin 13:9, 17). After the prophet received this command he was repeatedly tempted to disobey it (verses 7, 15, 18). It’s similar to what we experience: God gives us commands through His Word and we’re repeatedly tempted to disobey them.

First, the old prophet said, “Come home with me and eat bread” (v. 15). The man of God resisted, but then the old prophet said, “I too am a prophet as you are, and an angel spoke to me by the word of the Lord, saying, ‘Bring him back with you to your house, that he may eat bread and drink water’” (v. 18). The second temptation was much stronger and more convincing than the first.

There are a number of similarities between the man of God and Balaam (in Num 22:1-21):

First Balak said, “Please come at once, curse this people for me, for they are too mighty for me.” (Num 22:6). Balaam resisted (v. 13) and the second temptation: “Balak again sent princes, MORE NUMEROUS and MORE HONORABLE than before and they said to Balaam, ‘Please let nothing hinder you from coming to me; for I WILL CERTAINLY HONOR YOU GREATLY, and I WILL DO WHATEVER YOU SAY to me. Therefore PLEASE COME, curse this people for me’” (Num 22:15-17).

The lesson for us: temptation often comes back stronger, and we need to be sure to resist it.