Should someone have the responsibility of getting others to worship? 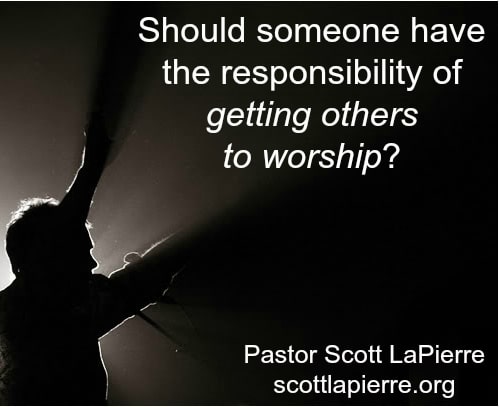 My last post, “A traditional church will die!”, discussed what a change it was for us musically the first time we visited WCC. But I also said there were a number of things we loved immediately, like the way the music sounded, the instruments we weren’t used to hearing used in service, the desire to honor the Lord instead of entertain, etc. Then there there were a number of other things we’ve grown to love over time, in particular the richness and theology of the hymns.

One of the most significant things we noticed – and found surprisingly refreshing musically – was the absence of someone trying to artificially stir us up emotionally. Aside from being invited to sit or stand, we weren’t being told what to do, how to act, feel, move, etc. I would say it felt very freeing, like we could worship without being manipulated. I started asking myself two questions as a result:


I’m all for music/worship/song leaders sharing thoughts, verses, feelings related to the songs, etc. but it’s not their responsibility to get people to worship. Since worship takes place in the heart, people might sing, clap, raise their hands (all things I do and am supportive of others doing), but what’s happening in the heart is what really matters, and can – or possibly even should – another person be expected to bring that about in someone else’s heart?

In the military, one of the common commands people yell when they’re in charge is, “Let’s get motivated!” Then in response everyone around the individual yells (usually the word, “Hooah!”), to show they’re motivated. I did this too, but there was always something about it that nagged at me: “People might yell in response – making it look like they’re motivated, and perhaps they are – but having someone tell them to get motivated doesn’t really motivate them if they’re not already motivated. Basically, they’re either motivated or they’re not.”

PrevPreviousA Traditional Church Will Die!
NextNot WHEN but WHY Jesus was bornNext