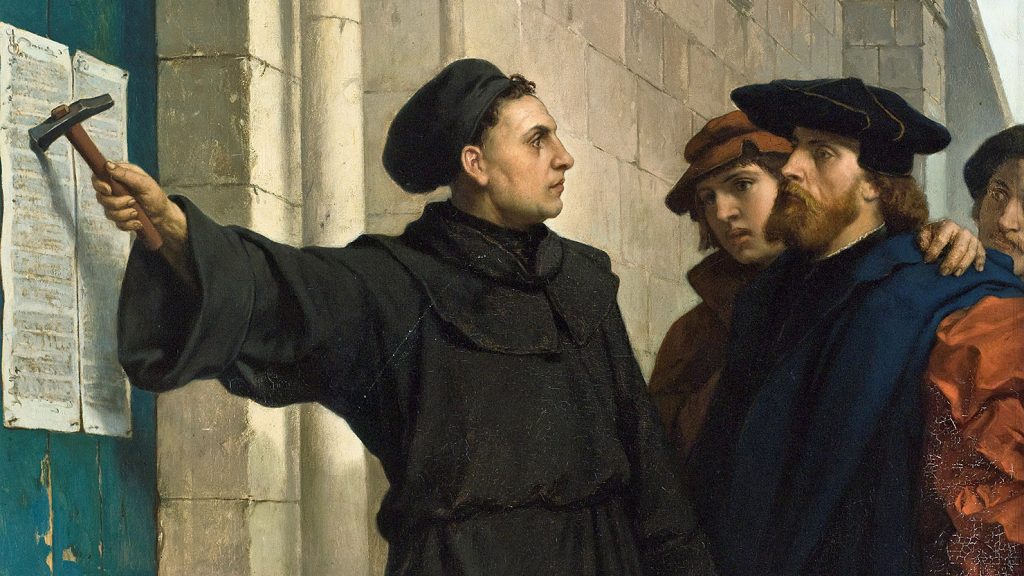 Reformation Day and the Five Solas

Unfortunately, Halloween comes to mind when many people think of October 31st. This date actually looks back on one of the most dramatic moments in church history. On this day in 1517 Martin Luther nailed his list of grievances against the Catholic Church to the door of a chapel in Wittenberg, Germany. These Ninety-Five Theses became the catalyst for the Reformation, which produced the Five Solas.

Martin Luther spoke one of my favorite quotes when the Catholic Church threatened to excommunicate him:

Unless I am convinced by Scripture and plain reason – I do not accept the authority of the Popes and councils, for they have contradicted each other – my conscience is captive to the Word of God. I cannot and I will not recant anything for to go against conscience is neither right nor safe. God help me. Amen.

The Catholic Church was unable to defend their false teaching with Scripture or respond to Luther’s criticisms. On May 25, 1521 Luther was declared an outlaw and his literature was banned. The Catholic Church said, “We want him to be apprehended and punished as a notorious heretic.”It was a crime for anyone in Germany to give him food or shelter.

Jesus said, “I will build My church, and the gates of Hades shall not prevail against it.”

It’s hard to argue there are more significant fulfillments of this promise than the victory God produced through Martin Luther. When October 31st rolls around each year we would do well to think not of Halloween, but of the Reformation and the Five Solas.

This excludes any works from being necessary for salvation. Justification – or being declared righteous by God – is received by faith only, apart from anything man can do. At the time the Catholic Church emphasized the use of indulgences (donated money) to purchase status, and even forgiveness, with God. Works, such as baptism and other sacraments, were seen as required for salvation.

This excludes the merit done by a person to achieve salvation. Salvation comes by divine grace, or unmerited favor only, not from anything a sinner could do to earn God’s favor.

This recognizes the Bible as the source of authority for Christians. This declaration rejected the authority of the Pope and the traditions of the Catholic Church.

This gives Jesus credit for His sacrifice in our salvation. The Catholic Church placed Mary, saints, and church leaders in the role of intercessors between man and God. The Reformers wanted to recognize Jesus as our High Priest, and through Him only is access to God available.

This teaches that God, and not man, should receive all glory and honor. Rather than elevating Mary, the Pope, or saints, all praise and adoration should be reserved for the Lord exclusively.

The Five Solas are demonstrated throughout Scripture. My favorite example took place with the paralytic who was lowered through the roof:

When [Jesus] saw their faith, He said to him, ‘Man, your sins are forgiven you.

We can’t do anything to obtain forgiveness, but it can be received by grace alone through faith alone in Christ alone. This is why a paralyzed man, who could do nothing but put faith in Christ, received forgiveness.

PrevPreviousThe Fall’s Effect on Marriage
NextExpect Trials in this LifeNext