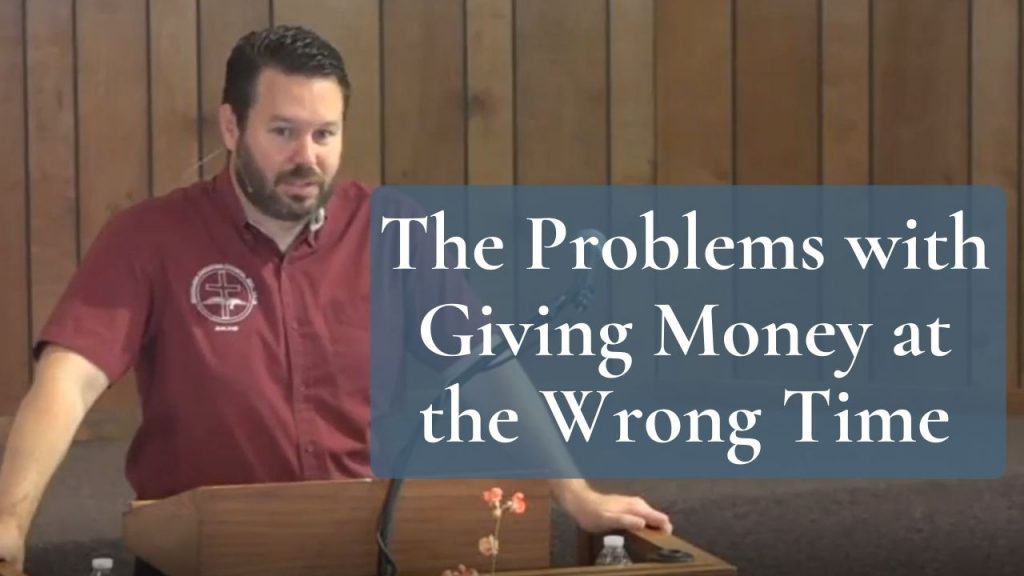 The Four Problems with Giving Money at the Wrong Time

There are problems associated with giving at the wrong time. Not only are we being poor stewards of God’s money, we can actually end up hurting those we intended to help.

Poor Stewards Give to Those Unwilling to Work

Proverbs 21:25 says the lazy man’s “hands refuse to labor.” This is the person in 2 Thessalonians 3:10, who “is not willing to work” and therefore should “not eat” (ESV). As important as it is to give to those who through no fault of their own find themselves struggling financially, it is equally important to avoid giving to those who through fault of their own find themselves struggling financially. The Bible discusses a few causes of poverty, and laziness is one of the most common: “Lazy hands make for poverty, but diligent hands bring wealth” (Proverbs 10:4 NIV; see also Proverbs 13:4; 20:4, 13; 24:34).

When well-meaning people disobey the command not to give to those unwilling to work (yes, Paul said “we commanded you” in 2 Thessalonians 3:10, so it is a command), they often defend their actions by saying something like, “Well, if they’re not going to use the money wisely, then that’s on them. I’ll just let God sort it out.” No. It’s on us because we’re disobeying a command. He wants us to sort it out.

Common sense tells us we can’t give to every need. Even the wealthiest philanthropists must decide what to do and not do with their money. Saying yes to something means saying no to something else in most areas of life, but it is especially true when our resources are limited, such as time and money. Hypothetically, even if we had the money to give at every opportunity, doing so would make us poor stewards because there are times when giving does more harm than good. Enabling is not loving. As is the case with all disobedience, there are negative consequences. Let’s consider the four reasons it is detrimental to give to those unwilling to work.

Problem One with Giving at the Wrong Time: Wastes Money

As a pastor, I’ve had weeks that I have had more people ask for money than for prayer. There are some differences in the requests: sometimes it’s a phone call, while other times it’s a person coming to the church. But one thing variable that is almost always the same is there’s a story that describes the most unfortunate circumstances imaginable; Job looks blessed compared to many of these people. Dealing with them is one of the most unenjoyable parts of my job not because I don’t want to help, but because as soon as they can tell that I will not give them money, they want nothing else to do with me.

In my years pastoring, I can think of only one person we helped financially who later communicated his appreciation. I can’t think of anyone we helped financially who was helped spiritually. In other words, the money we gave didn’t lead to salvation, sanctification, or regular church attendance. Maybe God did do something through our gift, but if He did, it was unknown to me.

Granted, whenever we help, no strings should be attached. We are not looking for a pat on the back or any sort of repayment. But because I have seen so little fruit from giving money to people who have asked, I’m left wondering how much better of a steward I might have been if I had given that same money to one of our missionaries or to someone with a proven need instead.

Problem Two with Giving at the Wrong Time: Hinders Repentance

Those who are not willing to work should not be given anything because that can shortchange the work God wants to do in their lives—they’re prevented from experiencing the consequences of their actions. It is in their best interest to reach the low point that can lead to repentance. That is what happened with the prodigal son:

He was longing to be fed with the pods that the pigs ate, and no one gave him anything. But when he came to himself, he said, “How many of my father’s hired servants have more than enough bread, but I perish here with hunger! I will arise and go to my father, and I will say to him, “Father, I have sinned against heaven and before you.”’

How much damage would’ve been done if well-meaning people “helped” the prodigal son? He reached the point of repentance because nobody gave him anything. Everything that works against repentance is detrimental, even if it looks loving, as charity does.

Those who are “not willing to work” should “not eat” because hunger can motivate them to find employment. But if they’re given charity, then hunger is prevented from being the strong incentive God desires that can lead to repentance.

When we give to people who are unwilling to work, we may very well be indirectly encouraging them to engage in other sins. When people aren’t spending their time and energy profitably, they often find unprofitable ways to spend them. Paul described this in the next verse of the passage we’ve been unpacking: “We hear that some among you walk in idleness, not busy at work, but busybodies” (2 Thessalonians 3:11 ESV).

When people aren’t busy working, they become “busybodies.” Idleness breeds compromise and is a foundation for other sins. Apparently the Thessalonians hadn’t learned, because Paul wrote in his first letter: “Aspire to lead a quiet life, to mind your own business, and to work with your own hands” (1 Thessalonians 4:11). If they were busy with work, they wouldn’t have the time or energy to worry about others. First Timothy 5:13 says something similar: “They learn to be idle, wandering from house to house, and not only idle but also gossips and busybodies, saying things which they ought not.” They weren’t busy working, so they became busy gossiping.

When I was an elementary schoolteacher, I knew that keeping students busy is the best way to manage their behavior. When students are working, they don’t have the time to get into trouble. The same is often true with adults. As a pastor, I have found that it is often people with too much time on their hands that are overly concerned with others. People who are busy serving don’t have the time to worry about others. If David had been with his men in battle, he would have been too busy to see Bathsheba:

A man who wastes his time in sloth offers himself to be a target for the devil, who is an awfully good rifleman. In other words, idle men tempt the devil to tempt them.

Knowing this, Paul continued, “Such persons we command and encourage in the Lord Jesus Christ to do their work quietly and to earn their own living (2 Thessalonians 3:12 ESV). This is the fourth command (previously in verses 4, 6, and 10), and he added an exhortation with two parts: First, “work quietly” instead of causing division and disruptions. Second, “earn [a] living” versus receiving charity.

What does this have to do with giving? When we give to those who are unwilling to work, not only are we enabling them to continue in their sin, but we are also allowing them to engage in further sin through their idleness. The best gift to give lazy people is not food or money, but a job.

Problem Four with Giving at the Wrong Time: Prevents Shame

Let me explain what shame is, biblically speaking, so we can understand why it’s important for those who are unwilling to work to experience it. Genesis 2:25 says Adam and Eve “were both naked…and were not ashamed.” This is the opposite of the way they should have felt because many verses associate nakedness with shame: “Your nakedness shall be uncovered, yes, your shame will be seen; I will take vengeance, and I will not arbitrate with a man” (Isaiah 20:4; see also Isaiah 20:4, 47:3, Nahum 3:5, Micah 1:11, Revelation 3:18, 16:15).

Some of the verses are about pagans who aren’t prone to experiencing shame, yet even they felt shame when naked; therefore, why didn’t Adam and Even experience any?

Shame can only be produced by the knowledge that you have done something wrong. For example, imagine you enter the home of people who always take their shoes off, but you don’t know that’s their practice. You walk around feeling fine until the owner says, “We always take our shoes off.” Then you feel ashamed. Or, have you ever started eating only for someone to say, “Why don’t we say grace and thank God for the food?” Now you’re ashamed.

Because Adam and Eve hadn’t yet eaten of the tree of the knowledge of good and evil, they didn’t know there was anything wrong with what they were doing; therefore, they felt no shame. In Genesis 3:5, Satan said, “God knows that in the day you eat of [the tree] your eyes will be opened, and you will be like God, knowing good and evil.” This was true! Satan mixes truth with lies because then the lies sound more convincing. They ate, and “at that moment their eyes were opened, and they suddenly felt shame at their nakedness. So they sewed fig leaves together to cover themselves” (Genesis 3:7 NLT). The tree of the knowledge of good and evil gave them the knowledge it was wrong for them to be naked, and they were ashamed. So they tried to clothe themselves.

What does this have to do with giving? When people are not willing to work but we give them money, we are showing them our support. This prevents them from developing the knowledge that their unwillingness to work is wrong. Hence Paul’s continued instructions: “As for you, brothers, do not grow weary in doing good. If anyone does not obey what we say in this letter, take note of that person, and have nothing to do with him, that he may be ashamed” (2 Thessalonians 3:13-14). It is detrimental to give to those not willing to work because it prevents them from experiencing shame that can lead to their repentance.