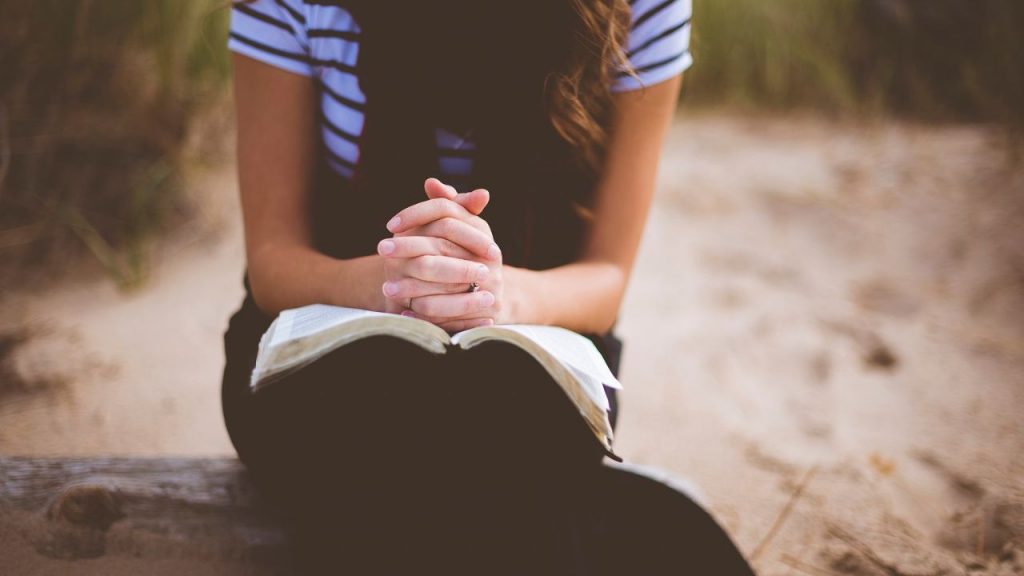 Mary and Martha Reveal Devotion Is Better than Service (John 12:1-8)

The account with Mary and Martha reveals devotion is more important to Jesus than service. Read or listen to this chapter from Work and Rest God’s Way to learn why Jesus didn’t rebuke Martha in John 12:1-8, even though He rebuked her when serving earlier.

Mary and Martha Reveal the Importance of Resting at Jesus’ Feet

The average foot contains six hundred sweat glands per square centimeter, which is hundreds more than the armpits. Our feet secrete salt, glucose, vitamins, and amino acids that provide the perfect diet for bacteria to thrive. In appreciation for the food, bacteria leave us with fatty acids that produce the common foot odor. Given our anatomy, no matter how clean we are, foot odor is almost unavoidable.

Feet might smell bad in our day, but we can be sure they smelled even worse in Jesus’ day. While most of us don’t like the idea of being too close to people’s feet, Mary didn’t let it hold her back. Luke 10:38–42 records:

Now it happened as they went that He entered a certain village; and a certain woman named Martha welcomed Him into her house. And she had a sister called Mary, who also sat at Jesus’ feet and heard His word. But Martha was distracted with much serving, and she approached Him and said, “Lord, do You not care that my sister has left me to serve alone? Therefore tell her to help me.”
And Jesus answered and said to her, “Martha, Martha, you are worried and troubled about many things. But one thing is needed, and Mary has chosen that good part, which will not be taken away from her.”

The village is Bethany, which was about two miles east of Jerusalem on the slope of the Mount of Olives. Mary and Martha were sisters, and their brother was Lazarus, whom Jesus raised from the dead. More than likely, all three of them lived together in this house. Mary shows up three times in Scripture, and each time she’s at Jesus’ feet (See also John 11:32 and John 12:3). When Jesus arrived, the sisters responded differently: Mary sat at the Lord’s feet, listening to His teaching, and Martha was “distracted with much serving.”

While it’s easy to condemn Martha, let’s put ourselves in her place. She has Jesus—the Christ, the Lord, the Son of God—for dinner. She “welcomed Him into her house” and wanted everything to be perfect. She’s busy with all the food preparations and formalities that we would expect. All the while, her sister, Mary, seemed to be relaxing! Would you be frustrated if you were Martha? Mary lived under the same roof. She should have felt equally responsible for making sure things went well, but she seemed to be doing nothing more than sitting idly at Jesus’ feet.

How do we explain Martha being rebuked, and Mary being commended? Making it more striking, Martha was serving Jesus! It would be one thing if she were serving someone else, but she was serving the Lord!

Mary and Marta Reveal Devotion Is More Important than Service

“Martha was distracted with much serving,” but distracted from whom, or from what? From Jesus and His teaching! She was so busy with excessive preparations for Jesus; she ended up neglecting Him. She brought Him into her home but then didn’t give Him the attention He deserves. Warren Wiersbe said, “What we do with Jesus is more important than what we do for Him.”1 God is more interested in our spiritual relationship with Him than He is in our physical service for Him: “For I desire mercy (relationship) and not sacrifice (service), and the knowledge of God (relationship) more than burnt offerings (service)” (Hosea 6:6).

We know what it looked like two thousand years ago for Mary to sit at Jesus’ feet and listen to His teaching, but what does it look like for us today?

We must make every effort to sit at Jesus’ feet and enjoy Him, rather than miss Him like Martha did because she was fussing over the details. Martha focused on the physical, but Mary focused on the spiritual. The food and dishes are temporary, but Jesus is eternal.

Mary and Marta Reveal Sitting at Jesus’ Feet Is a Choice

We misunderstand Mary and Martha if we think they’re two people simply living out their different personalities. We say, “Martha is a servant, so she served, and Mary is a worshiper, so she worshiped.” The problem is this gives the impression Mary’s not a servant, but Martha said, “My sister has left me to serve alone.” Mary had been serving too; she didn’t sit at Jesus’ feet because she was lazy.

Jesus said, “Martha, Martha, you are worried and troubled about many things. But one thing is needed, and Mary has chosen that good part, which will not be taken away from her.” Jesus rebuked Martha and then commended Mary, but what did Mary actually do that deserved a commendation? It looks like she did nothing! She was a silent example to her sister. She modeled what to do by not doing anything. Sometimes silence can be a great example (or rebuke) to others.

The account is set up in such a way that Mary and Martha’s situations are identical. They live in the same house. Jesus came into the house that belonged to them both. They were both serving. They both faced the same choice: keep serving or sit at Jesus’ feet. Jesus said Mary “[chose] that good part,” and that’s why He commended her. Mary could’ve been doing other things, but she chose to sit at Jesus’ feet. Mary worshiped, not because she was naturally a worshiper and acted according to her personality, but because that’s what she chose.

In the NKJV Jesus said, “Mary has chosen the good part,” but the NIV says she “has chosen what is better.” Often the Christian life consists of choosing, not just between good and evil, but between good and better. Martha didn’t choose something bad or spiritually neutral. She chose something that is good—serving! But at this moment, sitting at Jesus’ feet and listening to Him was better than serving Him. Service is good, but devotion is better.

Sometimes people don’t sit at Jesus’ feet, and then they say, “I didn’t have the time.” Typically, this is a lie because they were able to find time for other things they wanted to do. We make time for the things that are most important to us. Mary had all the competitions for her time and energy that Martha had, but she chose to put Jesus first. She made everything else—even serving—second.

At least occasionally, all of us have resembled Martha more than Mary. We rush around doing “what needs to be done,” while missing the glimpses of Jesus all around us. As difficult as it is, and as contrary to our culture as it is, we must intentionally try to slow down and model Mary.

Considering what happened in Luke 10, something interesting took place less than one year later in John 12:1–8:

Then, six days before the Passover, Jesus came to Bethany, where Lazarus was who had been dead, whom He had raised from the dead. There they made Him a supper; and Martha served, but Lazarus was one of those who sat at the table with Him. Then Mary took a pound of very costly oil of spikenard, anointed the feet of Jesus, and wiped His feet with her hair. And the house was filled with the fragrance of the oil.
But one of His disciples, Judas Iscariot, Simon’s son, who would betray Him, said, “Why was this fragrant oil not sold for three hundred denarii and given to the poor?” This he said, not that he cared for the poor, but because he was a thief, and had the money box; and he used to take what was put in it.
But Jesus said, “Let her alone; she has kept this for the day of My burial. For the poor you have with you always, but Me you do not have always.”

This is the day before Jesus’ Triumphal Entry and less than one week before His crucifixion. Martha prepared a meal for Jesus, the Twelve, her brother, and her sister. That’s fifteen people! They ate while reclining at the table with their feet extended away from them. This allowed Mary to perform the act that symbolized her devotion to her Savior. A denarius is one day’s wage, so the spikenard was approximately one year’s wages.2 There are several similarities between this account and the previous account with Mary and Martha:

Since Martha is serving again and Mary is at Jesus’ feet again, what else would we expect? We would expect Jesus to rebuke Martha again, but this is one of the main differences from the previous account. He didn’t for two important reasons.

In this account, Jesus was eating, but He wasn’t teaching. It was an appropriate time for Martha to serve. In Luke 10:42, Jesus said, “One thing is needed, and Mary has chosen that good part.” The “one thing needed” was listening to Jesus, and “Mary [chose] that “good part,” but now there was nothing better to choose.

John 12:3 says, “The house was filled with the fragrance of [the perfume].” I’m sure everyone loved the way the room smelled, but soon everyone would be hungry, and then they’d love the smell of the food Martha cooked. Serving might not look as extravagant as pouring perfume on Jesus’ feet, but it’s invaluable.

The account in John 10 focuses on what Mary did because it was a beautiful act of devotion and worship—although serving is also a beautiful act of devotion and worship! Jesus said, “Just as the Son of Man did not come to be served, but to serve, and to give His life a ransom for many” (Matthew 20:28). Jesus was such a servant that few things in life resemble Jesus as much as serving. This fact alone makes serving beautiful and extravagant.

In the previous account, Jesus rebuked Martha in front of many people, which must have been very humbling. Martha did two things to her credit. First, she didn’t pout or quit. She could’ve said, “Forget it. I try to serve, but nobody appreciates it. I even get rebuked. I’m never serving again.” Instead, she went back to serving!

Second, she learned from what took place earlier. The account says, “Martha served,” but who else served? We know Mary didn’t, because she was busy pouring perfume on Jesus’ feet. There’s no indication anybody else served, which is to say nobody helped Martha. What’s different about her this time? Her attitude! She’s serving with a joyful heart. The Lord wants us serving, but He cares how that service is performed.

One of the keys to working and resting God’s way is knowing when to do one or the other. We must find the right balance between the two in our busy lives if we’re going to be healthy physically, mentally, emotionally, and spiritually. Sometimes the rest we need is physical, while other times, it is spiritual. We’ve already discussed resting physically. In the next chapter, we’ll discuss resting spiritually. Sometimes the best way to serve Jesus is simply by sitting at His feet.

PrevPreviousBible Verses About Working Diligently Apply to Everyone (Proverbs 13:4)
NextThe Importance of Sitting at the Feet of Jesus (Luke 10:38-42)Next