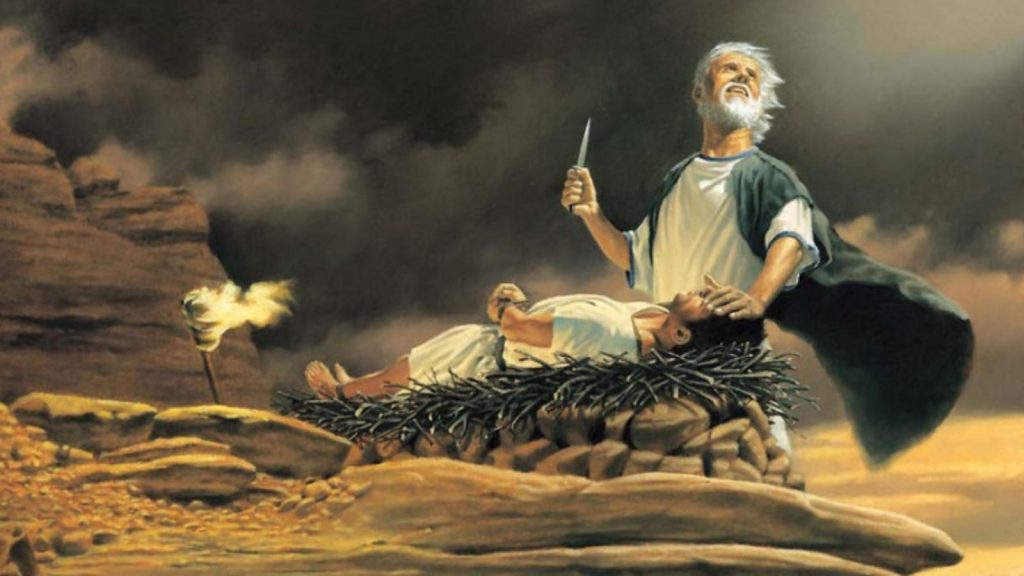 Jesus and Isaac’s Submission to Their Fathers

The summer after eighth grade, I flew from California to upstate New York to work on my uncle’s dairy farm. Being thirteen years old and having no friends in the area, I had to find things to do to entertain myself. A bull stood at the end of the barn staring straight ahead all day. Once, I decided it would be fun to try to get him to move. Since he did not enjoy this as much as I did, he brought his head up underneath me and launched me into the air. Think of a cowboy thrown off a bull during a rodeo, and you have the correct imagery. Fortunately, the barn’s ceiling was high, so I did not slam into it, but I did come crashing down onto the cement floor.

One man who worked on the farm saw what happened and ran down to me. He screamed, “You could have gotten yourself killed! Do you see that little chain around the bull’s neck? That is all that is holding him there, and he could break it at any moment!”

My first thought was, “They need to put a bigger chain around his neck!” My second thought was, “That bull has so much strength, but he allows himself to be subdued by so little.” Unfortunately, we think of submission as a sign of weakness, but it is much like the bull—strength that is kept under control. Submission is a choice; it is deliberate and willful. Submission that is forced is not submission.

Jesus and Isaac Were Submissive to Their Fathers

To appreciate Isaac’s submission, we must dispel the incorrect images of Abraham sacrificing a small boy who was helpless against his stronger, more powerful father:

And Abraham said to his young men, “Stay here with the donkey; the lad and I will go yonder and worship, and we will come back to you.”

The Hebrew word for “young men” and “lad” is na’ar. Even though Abraham called Isaac “lad,” we should not think he was younger than the servants. The amount of wood needed to build the altar was significant, and Isaac was strong enough to carry it to the top of the mountain, even though it was “afar off” (Genesis 22:4).

Were Jesus and Isaac the Same Age When They Were Sacrificed?

Sarah had Isaac when she was ninety (Genesis 17:17). Genesis 23:1 says she died when she was one hundred twenty-seven years old. Isaac was thirty-seven at that time, which makes him somewhat younger in Genesis 22. Considering the account is a picture of what God would do with His Son two thousand years later, Isaac and Jesus could have been close in age when sacrificed.

Abraham was one hundred years old when Isaac was born, so add Isaac’s age in Genesis 22 to one hundred and you get Abraham’s age when he was going to sacrifice Isaac. Regardless of their exact ages, there was a strong, healthy son, and an old father. Isaac could have overpowered Abraham, but he kept his strength under control. Isaac’s submission is the reason Abraham could “(bind) his son”:

Abraham built an altar there and placed the wood in order; and he bound Isaac his son and laid him on the altar, upon the wood.

Jesus and Isaac Trusted Their Fathers

When He was reviled, did not revile in return; when he suffered, He did not threaten, but committed Himself to Him who judges righteously.

I am the good shepherd. The good shepherd gives His life for the sheep… As the Father knows Me, even so I know the Father; and I lay down My life for the sheep… And other sheep I have which are not of this fold; them also I must bring, and they will hear My voice; and there will be one flock and one shepherd… Therefore My Father loves Me, because I lay down My life that I may take it again. No one takes it from Me, but I lay it down of Myself. I have power to lay it down, and I have power to take it again. This command I have received from My Father… Greater love has no one than this, than to lay down one’s life for his friends.

Jesus and Isaac Were Willing to Die

By this we know love, because He laid down His life for us.

When the mob came to arrest Jesus, Peter took out his sword to defend Him, and He said:

Put your sword (away)… Do you think that I cannot now pray to My Father, and He will provide Me with more than twelve legions of angels?

Jesus and Isaac Were Placed on the Wood for Their Sacrifices

Abraham built an altar there and placed the wood in order; and he bound Isaac his son and laid him on the altar, upon the wood.

When our first child, Rhea, was born, a doctor and some friends gave my wife, Katie, and me the same warning: “Do not cut your baby’s nails with clippers. You could end up catching a finger.” One time Katie used clippers, and sure enough, she cut Rhea’s finger. Rhea was hurt, but Katie hurt even more. She felt so bad that she could not even talk about it without crying.

The injury was not serious. Our children have experienced much worse since then, but nothing has ever upset Katie as much. Why was she so troubled when she clipped Rhea’s finger? Reflecting on the situation, I came to understand Katie was devastated because she caused Rhea’s pain.

How must Abraham have felt when he laid Isaac on the wood and thought about what he would do? Just as much as Katie wished she could have been the one with the bleeding finger, Abraham must have wished he could be the one on the altar versus being the one standing beside it. Being able to take Isaac’s place would have seemed too good to be true for this old man. In the years I have been a father, I have thought of this story and wondered if I could do what God called Abraham to do.

Jesus and Isaac Were Sacrificed by Their Fathers

And Abraham stretched out his hand and took the knife to slay his son.

Abraham appears in control as he goes about the preparations. He rose early in the morning, saddled his donkey, took two servants with him, split the wood, departed, commanded the servants to remain behind, and placed the wood on his son. But never does Abraham look more sovereign over the sacrifice of his son than when he “took the knife to slay” him.

The knife is mentioned in verses 6 and 10, and it speaks of execution. Priests used knives for centuries to sacrifice animals, and Abraham would use one on Isaac. As responsible as Abraham would have been, had he sacrificed Isaac, God is that responsible for sacrificing Jesus. We say, “The Jews murdered their Messiah,” or “The Romans crucified Jesus,” or “Our sins nailed the Son of God to the cross.” While these statements are true in that Jesus died for our sins, it is even truer to say the One Person responsible for crucifying Him was His Father.

When Pilate had Jesus before him, he mistakenly thought he had authority over Him:

Then Pilate said to Him, “Are You not speaking to me? Do You not know that I have power to crucify You, and power to release You?”
Jesus answered, “You could have no power at all against Me unless it had been given you from above.”

Jesus let Pilate know the authority he had was given to him by God to accomplish His purpose. The only reason Pilate could do anything with Jesus was because Pilate’s actions furthered God’s plan for Christ to be crucified:

When the Christians in the early church prayed for boldness they said:

For truly against Your holy Servant Jesus, Whom You anointed, both Herod and Pontius Pilate, with the Gentiles and the people of Israel, were gathered together to do whatever Your hand and Your purpose determined before to be done.

At first, it sounds as though Christ’s sacrifice is attributed to these individuals, but the final words declare it was God. All these people gathered together to see Christ crucified, but in doing so, they fulfilled God’s predetermined plan. Herod, Pilate, the Gentiles, and the Jews could not have been more opposed to each other, but God banded them together to see Christ crucified.

Was Jesus Slain Before He Was Born?

[Jesus is] the Lamb slain from the foundation of the world.

The verse is in the past tense; how can it say Jesus was slain thousands of years before He was born in Bethlehem? This is called the Prophetic Perfect. When God has determined something, it is so certain that it will take place that it is written as though it already happened. God the Father was so determined to sacrifice His Son for our sins that He wrote about it as though it had already taken place in the past.

The Father was responsible for the Son’s sacrifice:

It pleased the Lord to bruise Him;
He has put Him to grief.
When You make His soul an offering for sin…

The Lord “bruised Him… put Him to grief… made His soul an offering,” and unbelievably, “it pleased the Lord” to do this. Elsewhere Scripture says God does not take pleasure in punishing the wicked:

God takes no pleasure in the death of the wicked, but He took pleasure in the death of His perfect, sinless Son. These verses are the opposite of what we would imagine. God was grieved, distraught, pained, and heartbroken are the words we would expect to read. How could God be pleased with His Son’s death? Because of what it accomplished. Our redemption. Our forgiveness. Our righteousness. Our reconciliation. If the Father punished His Son, He would not have to punish us. If the Father poured out His wrath on Jesus, He would not have to pour out His wrath on us. God the Father sovereignly sacrificed His Son, and it was prefigured two thousand years earlier when Abraham walked up the mountain carrying the knife to sacrifice Isaac.

Jesus and Isaac Were Silent When Laying Down Their Lives

Consider this conversation between Abraham and Isaac:

Isaac speaks to Abraham. He asks his father a question, and his father responds. Therefore, Isaac’s silence before being sacrificed is astonishing. He is bound, laid on the altar, his father picks up the knife, but he does not say a word. Scripture prophesied of the same response from Jesus:

The fulfillment was shown during Jesus’ trials:

PrevPreviousWhere Does the Old Testament Prophesy Jesus Would Be Raised on the Third Day?
NextFive Things Submission Does Not Mean for WivesNext