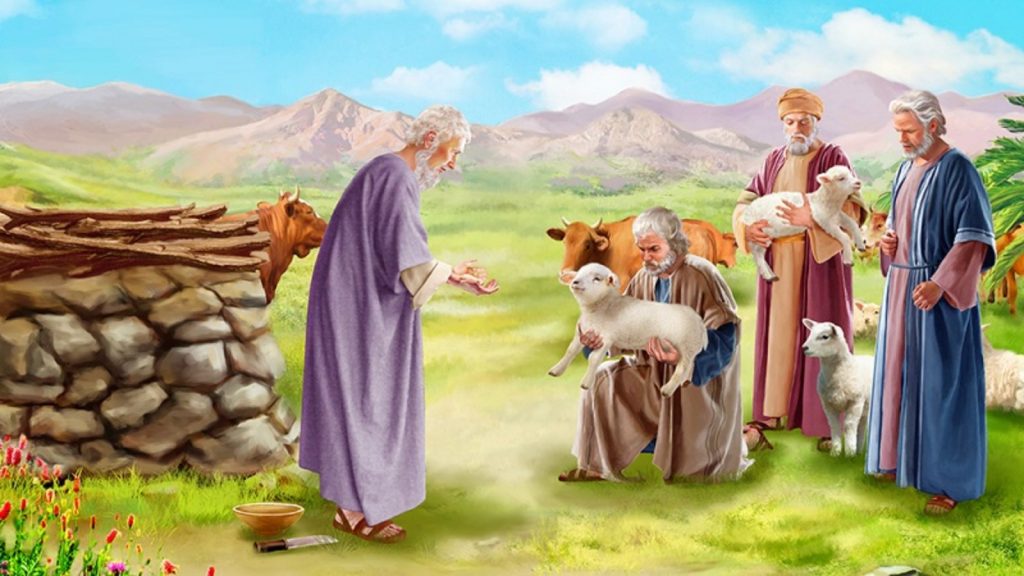 Jesus Christ in the Book of Job, and Job as a Type of Christ in Job 42

Job longed for Someone during his trials, and his words provide some of the greatest revelation of the Messiah in the Old Testament. Although Job did not have the revelation of Jesus that we have, he still looked forward to Him in faith. Centuries later, Jesus would reveal Himself to be the reality and substance of Job’s words.

Jesus Christ in the Book of Job as Mediator

Job longed for a Person to stand between him and God:

Job asked: “Truly I know it is so, but how can a man be righteous before God?”

This is the most important question people can ask, because it determines where we spend eternity. Job answered his question and explained why “a man [cannot] be righteous before God”:

If one wished to contend with Him, he could not answer Him one time out of a thousand. God is wise in heart and mighty in strength. Who has hardened himself against Him and prospered?

Nobody can stand before God and respond to His questions. Job learned this the hard way when he was finally given his audience.

At the end of the chapter, Job explained the problem and necessary solution:

For He is not a man, as I am, that I may answer Him, and that we should go to court together. Nor is there any mediator between us, who may lay his hand on us both.

He needed a Mediator to stand between God and him. First Timothy 2:5 says, “For there is one God and one Mediator between God and men, the Man Christ Jesus.” The words “lay his hand on us both” refer to bringing people together, which is how it is translated in some Bibles. Job was looking for Someone to reconcile him to God, and 2 Corinthians 5:18 says, “God has reconciled us to Himself through Jesus Christ.”

Let Him (the Mediator) take His (God’s) rod away from me, And do not let dread of Him terrify me.

A rod administers punishment, and Job wanted the Mediator to take away the judgment he deserved. But if God took it from him, He would have to administer the punishment to Someone else. Sins can’t go unpunished or God wouldn’t be just. Job expected his Mediator to receive his punishment. Isaiah 53:5 says Jesus “was wounded for our transgressions, He was bruised for our iniquities.”

Then I would speak and not fear Him, but it is not so with me.

Job could approach God confidently if the Mediator did what he described, but he knew that had not been done for him. Jesus has done this for us though: “We have boldness and access [to God] with confidence through faith in [Jesus]” (Ephesians 3:12).

After the Mediator took God’s rod away from Job, he would no longer “fear God.” But the words “it is not so with me” mean he knew it wasn’t within his power to accomplish this.

Job longed for the Mediator during his trials, and He is available to us when we suffer. Jesus allows us to “come boldly to the throne of grace, that we may obtain mercy and find grace to help in time of need” (Hebrews 4:16).

Job Looked Forward to His Mediator by Faith, Because Even He Wasn’t Righteous Enough

Job couldn’t see his Mediator. He didn’t know who He was, but he could look forward to Him in faith. This is Old Testament salvation, and it’s just like New Testament salvation: justification by faith. Consider the ways Job is described: “There was a man in the land of Uz, whose name was Job; and that man was blameless and upright, and one who feared God and shunned evil” (Job 1:1; see also Job 1:8 and 2:3).

What Can We Learn from Job?

Job teaches there’s no righteousness man can attain that’s “good enough.” The religious leaders were the picture of self-imposed righteousness, but Jesus said:

Unless your righteousness exceeds the righteousness of the scribes and Pharisees, you will by no means enter the kingdom of heaven

Jesus Christ in the Book of Job as Advocate

He longed for an Advocate to plead his case:

“Surely even now my witness is in heaven, and my evidence is on high.”

A witness (or advocate) speaks on behalf of someone else, and that is what Job wanted. He knew there was Someone to testify on his behalf, and he even knew this Person was “in heaven…on high.”

“My friends scorn me; my eyes pour out tears to God. Oh, that one might plead for a man with God, as a man pleads for his neighbor!”

Job lost everything. Even his “friends” became his accusers. It would not be too much to say that he was the loneliest man in the world. In the face of so much desertion and criticism, he wanted someone on his side. He knew there was an Advocate to defend him the way “a man pleads for his neighbor.” When Job knew he did not have anyone else, he knew he had this Person.

Jesus Christ in the Book of Job as Redeemer

He longed for Someone to deliver him out of his suffering:

For I know that my Redeemer lives, and He shall stand at last on the earth. And after my skin is destroyed, this I know, that in my flesh I shall see God, whom I shall see for myself, and my eyes shall behold, and not another. How my heart yearns within me!

Job knew his Redeemer was alive and He would stand on the earth at the end of time. Satan “struck Job with painful boils from the sole of his foot to the crown of his head” (Job 2:7). Job said, “My flesh is caked with worms and dust, my skin is cracked and breaks out afresh” (Job 7:5). His flesh was in terrible shape, but he knew after it was “destroyed,” he would “see God in [his] flesh.” How could Job see God in his flesh if his flesh was destroyed? He expected to receive a new body:

Behold, I tell you a mystery: We shall not all sleep, but we shall all be changed—in a moment, in the twinkling of an eye, at the last trumpet. For the trumpet will sound, and the dead will be raised incorruptible, and we shall be changed. For this corruptible (earthly bodies) must put on incorruption (glorified bodies), and this mortal (earthly bodies) must put on immortality (glorified bodies).

Job said he would see his Redeemer with “[his own] eyes,” and he knew this meant “[seeing] God” Himself. Jesus, the Redeemer, is God: “In the beginning was the Word, and the Word was with God, and the Word was God” (John 1:1). Following the Incarnation, Jesus said, “I and My Father are one” (John 10:30). Our flesh will be destroyed, but we too will receive new bodies and see God for ourselves.

Despite Job’s suffering, these thoughts were still enough to cause “[his] heart [to] yearn within [him].” He was overwhelmed as he looked forward in faith to being redeemed. Our joy should be even greater considering we have been redeemed:

Knowing that you were not redeemed with corruptible things, like silver or gold, from your aimless conduct received by tradition from your fathers, but with the precious blood of Christ, as of a lamb without blemish and without spot.

Even during the worst trials, the redemptive work of Christ should cause our “hearts to yearn within [us]” for Him.

Job as a Type of Christ in Five Ways

After Job suffered, he served as one of the clearest shadows and types of Christ the Old Testament. He longed for his Mediator, Advocate, and Redeemer throughout his trials, and then he became a picture of the Person, Jesus Christ, to his friends in five ways.

God said His “wrath was aroused against his friends.” How could God’s wrath be turned away? This was hundreds of years before the Mosaic law instituted the sacrificial system, but even then it was clear an offering needed to be made for sin. Seven is the number of completion, which means his offering pictured a perfect sacrifice on his friends’ behalf.

God did not treat Job’s friends “according to [their] folly,” which is to say they did not receive the punishment they deserved. They avoided God’s judgment because he interceded for them. Similarly, God’s wrath is against us, but Jesus offered a perfect sacrifice on our behalf. We do not receive the punishment our sins deserve. We avoid judgment, because of Jesus’ intercession for us.

Second, God Accepted Job in Place of His Friends

So Eliphaz the Temanite and Bildad the Shuhite and Zophar the Naamathite went and did as the Lord commanded them; for the Lord had accepted Job.

Third, Job Was Rejected and Then Exalted

Then all his brothers, all his sisters, and all those who had been his acquaintances before, came to him and ate food with him in his house; and they consoled him and comforted him for all the adversity that the Lord had brought upon him. Each one gave him a piece of silver and each a ring of gold.

[Jesus] made Himself of no reputation, taking the form of a bondservant, and coming in the likeness of men. And being found in appearance as a man, He humbled Himself and became obedient to the point of death, even the death of the cross. Therefore God also has highly exalted Him and given Him the name which is above every name, that at the name of Jesus every knee should bow, of those in heaven, and of those on earth, and of those under the earth, and that every tongue should confess that Jesus Christ is Lord, to the glory of God the Father.

Job’s friends honored him because of what he did for them. How much more honor should we give Christ, because of the greater work He did for us as our Mediator, Advocate, and Redeemer?

The first two chapters of the Book of Job contain what could be the greatest description of an individual in all of Scripture, second only to Christ Himself:

Job’s description contributes to the main struggle people have with this book. If Job looked like a terrible sinner who “had it coming,” there would be no dilemma. Instead, we ask: “How could God let an innocent, righteous man experience such terrible suffering?”

Despite Job’s character, he was still a sinner: “There is none righteous; no, not one” (Romans 3:10). Job revealed the truth of this verse. At times he accused God and revealed self-righteousness.

There has only been one perfectly righteous, innocent Sufferer, and that is Jesus. The Gospels go to great lengths throughout His trials to reveal this:

Fifth, Job Suffered and Then Saved His Friends

Job looked forward to the Man who suffered and saved His friends in the true and greater sense. He suffered. But Jesus suffered for the sins of others. Job offered a sacrifice for his friends. But Jesus offered the one sacrifice that provided eternal life:

This Man, after He had offered one sacrifice for sins forever, sat down at the right hand of God.

Job saved his friends physically and temporarily. But Jesus saves His friends spiritually and eternally.

PrevPreviousAre All Sins Equal in the Bible?
NextAll Things Work Together for Good to Those Who Love God (Romans 8:28)Next