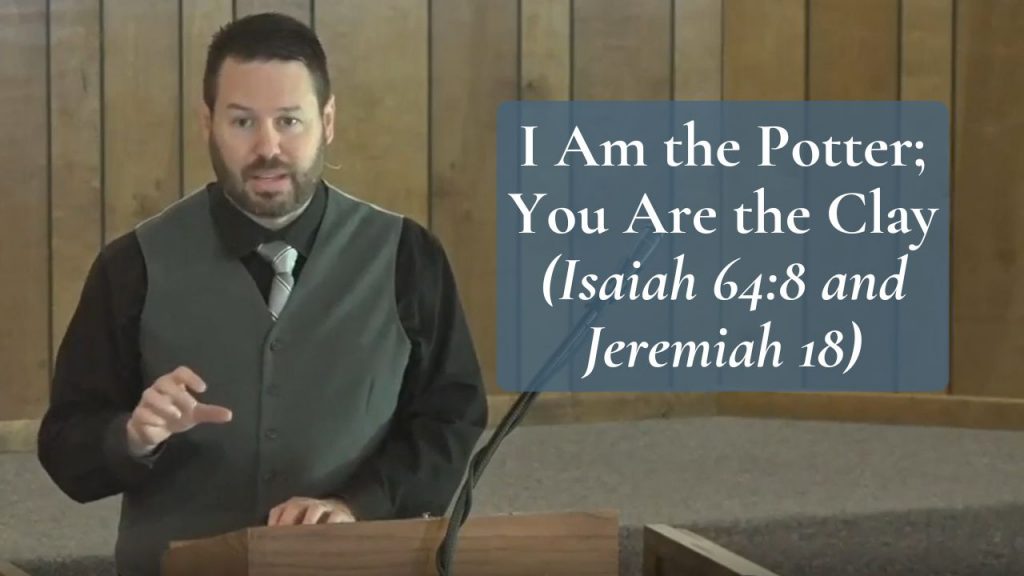 In Isaiah 64:8 God says, “I am the potter; you are the clay.” The potter and the clay in Jeremiah 18 is an object lesson God used to teach this truth. Read part of this chapter from Enduring Trials God’s Way to learn how God is shaping us.

Since God is sovereign, including over the trials we experience, to reject trials is to reject His will for us. The Potter and the Clay is an object lesson God used to teach this truth to His people:

More than likely Jeremiah had passed the potter’s house many times in his lifetime, but now God told him to pay a visit.

The Potter, the Clay, and the Wheel

We are the clay, and You our potter;
And all we are the work of Your hand.

As Jeremiah watched the potter work, he learned how we should respond to God’s work in our lives. In 2 Corinthians 4:7 Paul called us “earthen vessels.” This is fitting since God “formed [us] of the dust of the ground” (Genesis 2:7a). When experiencing trials, probably more than any other time, we recognize the fragile nature of our “clay” bodies. Job especially noticed this during his suffering: “Remember, I pray, that You have made me like clay. And will You turn me into dust again?” (Job 10:9; see also Job 4:19).

Job asked God to consider how weak his body was, in the hope it would lead Him to ease his trials. We can feel like this during trials too, wondering if God is aware of our feebleness: “Does He know how weak I am, and this suffering feels like more than I can handle?” As this account reveals, the Potter is completely familiar with the clay, and He knows best how to handle it.

Clay is a cheap material that remains worthless until it is in the hands of a skillful potter who can make it into something valuable.

The potter sat before two parallel stone wheels joined by a shaft. He turned the bottom wheel with his feet and worked the clay on the top wheel. The clay sat on the wheel as it turned around and around, picturing the way our lives feel at times. Solomon described the repetitiveness: “That which has been is what will be, that which is done is what will be done, and there is nothing new under the sun” (Ecclesiastes 1:9). The potter controls the wheel like God controls the circumstances of our lives:

And the vessel that he made of clay was marred in the hand of the potter; so he made it again into another vessel, as it seemed good to the potter to make.
Then the word of the Lord came to me, saying: “O house of Israel, can I not do with you as this potter?” says the Lord. “Look, as the clay is in the potter’s hand, so are you in My hand, O house of Israel!

The Potter Works the Clay Until It “Seems Good to Him”

The Old Testament was primarily written in Hebrew, and the word for “marred” is shachath. It means “destroyed or corrupted.” It is the same word for “ruin” in Jeremiah 13:7 that describes the “profitable for nothing” sash. Since clay was cheap, when a vessel was marred or ruined, potters threw it out and started over.

Although, the potter Jeremiah watched worked patiently on the same piece of clay until it became a vessel that “seemed good to [him].” Paul said we can be “confident of this very thing, that He who has begun a good work in you will complete it until the day of Jesus Christ” (Philippians 1:6). We might feel marred, disfigured, or flawed, but instead of discarding us, God can reshape us “into another vessel” that is precious and valuable.

The Hebrew word for potter is yatsar, and over half the times it occurs in the Old Testament, it is translated as “form,” “fashion,” or “make.” For example, it is the word God used when commissioning Jeremiah: “Before I formed (yatsar) you in the womb I knew you” (Jeremiah 1:5). As God formed Jeremiah, He will form our lives. As the potter had power over the clay, so God has power over our circumstances. Vessels have a purpose, and God fashions us to fulfill our purpose since “we are His workmanship” (Ephesians 2:10).

The “Hands” the Potter Uses to Shape Us

The potter’s hands shaped the clay, and there are many “hands” God uses to shape us. Parents, siblings, teachers, elders, and authors might come to mind, but Scripture teaches trials are the clearest way God molds us. Unlike the clay on the wheel, which has no free will of its own, we choose how we respond in the Potter’s hands. If we are like the clay—soft, pliable, and submissive—then we become better. God will make us into something that “[seems] good to [Him].”

The difficulty is being shaped on the wheel of life is often painful. Trials can tempt us to become bitter toward the Potter who is shaping us. We can become stiff and hard in His hands, which is why Isaiah 45:9 warns:

Woe to him who strives with his Maker! Let the potsherd strive with the potsherds of the earth! Shall the clay say to him who forms it, “What are you making?” Or shall your handiwork say, “He has no hands”?

When Clay Becomes Hard and Stiff in the Potter’s Hands

When clay becomes as hard as Pharaoh, it can no longer be formed. Then it is good for nothing and must be thrown out. This happened with the Jews:

Jeremiah 17:23—But they did not obey nor incline their ear, but made their neck stiff, that they might not hear nor receive instruction.”

The Jews’ hardness in chapter 17 led to the command in chapter 18 for Jeremiah to go to the potter’s house. God wanted to show His people He was working for their good. They remained hardened though, so then God showed them what happens to stubborn clay.

God told Jeremiah to bring these leaders with him because this was another object lesson and they could report back to the people what was in store for them if they remained hardened toward God. They would be broken like the clay vessel was broken.

Judas serves as a tragic example:

Then Judas, His betrayer, seeing that He had been condemned, was remorseful and brought back the thirty pieces of silver to the chief priests and elders, saying, “I have sinned by betraying innocent blood.”
And they said, “What is that to us? You see to it!”
Then he threw down the pieces of silver in the temple and departed, and went and hanged himself.
But the chief priests took the silver pieces and said, “It is not lawful to put them into the treasury, because they are the price of blood.” And they consulted together and bought with them the potter’s field, to bury strangers in.

The religious leaders used the money to purchase a field where a potter discarded worthless vessels. Judas was overcome with guilt, but instead of trusting God’s forgiveness, he committed suicide:

Judas purchased a field with the wages of iniquity; and falling headlong, he burst open in the middle and all his entrails gushed out.

Judas did not purchase the field himself, but since the religious leaders used the money he gave them, it is attributed to him.

When Judas hanged himself, either the branch or the rope broke, and his body fell to the ground. The verse creates the image of a vessel being discarded and then breaking open in the field. God did not discard Judas though. Judas discarded himself. Since the field was purchased with Jesus’ blood money, it reveals Christ’s death has the power to redeem all broken, worthless, and discarded vessels. Judas could have been one of them if he had repented.

God’s Sovereignty and Man’s Free Will

These accounts—Jeremiah at the potter’s house, Pharaoh, and Judas—are fascinating, because they deal with God’s sovereignty and the free moral agency of man. Is the Potter or the clay responsible for the way a vessel turns out?

What is the answer? The correct balance is that while God is sovereign over the trials that come into our lives, we choose how to respond to them. We are in the Potter’s hands, and we face two choices. If we are soft and pliable, we can become better. If we are stubborn and stiff, we can become bitter. Two individuals in the Old Testament serve as good examples.

PrevPreviousSix Wonderful Examples of God’s Mercy in the Bible (Video)
NextSorrow of the World Produces Death, but Godly Sorrow Repentance (2 Corinthians 7:10)Next