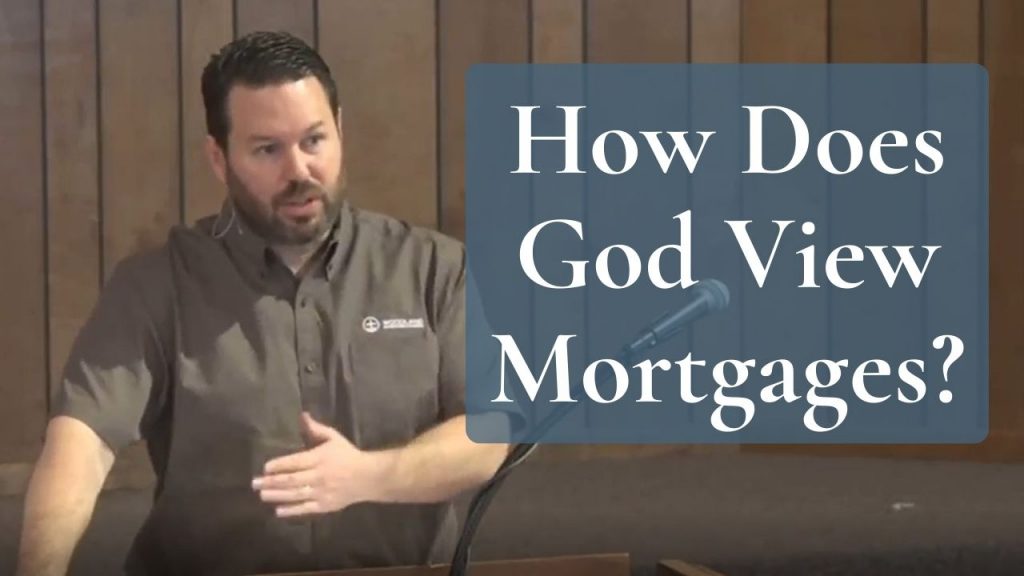 How Does God View Mortgages?

We know how God views debt. We have also looked at the national debt, credit card debt, and automobile debt. But how does God view mortgages? What does the Bible say about mortgages? Read on (or listen) to find out!

For simplicity’s sake let’s divide our expenses into two categories: nonessential (such as vacations, eating out, entertainment) and essential (food, clothing, and housing). Debt should be avoided for nonessential expenses (such as vacations and flat screen televisions) and it can be avoided for most essential expenses. The one exception is housing because many people don’t have the money to buy a home with cash. If you’re wondering how much to spend on housing, the general rule is 30 percent of your income, whether it’s rent or a mortgage payment.

We considered not paying off our mortgage because of the tax deduction we could receive, but we were deterred for three reasons. First, we were given The Total Money Makeover by Dave Ramsey as a wedding gift and we read it on our honeymoon. Regarding the tax deductions from a mortgage, he wrote:

If you have a home with a payment of around $900, and the interest portion is $830 per month, you have paid around $10,000 in interest that year, which creates a tax deduction. If, instead, you have a debt-free home, you would, in fact, lose the tax deduction, so the myth says to keep your home mortgaged because of tax advantages.

Second, we were sickened to think about the amount we would end up repaying the bank. Over the thirty years of the loan, the total would be $372,000, which would be more than twice the amount of the loan itself.

Third, and most importantly, as we talked about last week, we wanted to be guided by God’s Word and not man’s wisdom. Even if it seemed to make the most sense to keep our mortgage, we were convicted to pay it off because the Bible cautions against debt.

Being Upside Down in Your Mortgage

Some people think a mortgage is an acceptable form of debt because homes appreciate, making them investments. This contrasts with other assets—such as automobiles, boats, or electronics—that typically depreciate with time. The problem is many people have found themselves upside down in their mortgages (the value of the home is less than the loan amount). During the subprime mortgage crisis (2007 to 2010), also known as the Great Recession, 11 million Americans, or 23 percent, of the nation’s homeowners were upside down. Once the crisis was over, the number peaked at 31 percent in the third quarter of 2012.

The situation improved, but The New York Times reported in January 2015 that “about 17% of all homeowners are still ‘upside down’ on their mortgages.” A 2013 article in NPR titled “You Be the Judge: Is the Housing Market Really Improving?” reads, “The number of ‘underwater’ homeowners may be down, but it’s still extremely high, with an estimated one in five owing more than the home’s worth.” Another article:

Homeowners across the U.S. confronted the reality that their houses were worth a fraction of what they paid for them. Now, a decade later, even though the recession is over, more than six million homeowners are still upside down on their mortgages.

NPR News, “A Decade Out From The Mortgage Crisis, Former Homeowners Still Grasp For Stability,” KTOO, May 22, 2016

We live in a fallen world. When one trial concludes, another begins. As I write this, in 2020, we are dealing with COVID-19. CBS News reports,

6.7 million households could be evicted in the coming months. That amounts to 19 million people potentially losing their homes, rivaling the dislocation that foreclosures caused after the subprime housing bust.

The above statistics reveal there is simply no guarantee that a house will appreciate. Many people can attest to the financial problems they experienced when unforeseen circumstances, such as a recession, caused their home’s value to plummet.

As James 4:14-15 says, “You do not know what will happen tomorrow. For what is your life? It is even a vapor that appears for a little time and then vanishes away. Instead, you ought to say, ‘If the Lord wills, we shall live and do this or that.’” We don’t know how the economy will fare, what trials we will face, what emergencies will occur, what expenses we will have to pay for, or even what our job or income will look like. Many people have thought they would make the same amount of money, or more, for the rest of their lives, only to find themselves laid off when their company experienced hard times and downsized. The list of situations that can lead to a home foreclosure is endless.

A mortgage is a major commitment to make when the future is unknown. We must exercise extreme caution (and prayer) before locking ourselves into decades of payments that are dependent on our financial situations remaining the same. People become indebted to the loan company for up to thirty years (sometimes more if they refinance or take out a second mortgage). Think (and pray) carefully before embracing a mortgage you might pay off for the rest of your life. Consider that even if you do pay off the mortgage according to the payment schedule, the result is that you’ve given the bank more than twice the amount of the loan itself. This alone is a great reason to strive to pay a mortgage off early. When viewed this way, we must examine every mortgage and consider whether it is a good use of God’s money.

Three Ways to Avoid a Mortgage

When couples in the church I pastor give birth to a child, I try to bring them a meal, meet the baby, see if they need anything, and pray with them. When Robert and Katy Cunningham had their fifth son, I went to see not only them and their new baby, but also their new living situation. They (seven people, including five energetic young boys) had moved into a broken-down motorhome that was sitting on the property where Robert was building their house.

When I returned home, I told my wife two things. First, I shared how proud I was of Robert and Katy for their commitment to being debt-free and all the sacrifice that was involved in sticking with that conviction. Second, I said, “We don’t have very much to complain about!”

Not long ago, Robert finished the construction. They were able to move out of the motorhome and into their new house debt-free.

Maybe you have said, “People can’t buy a home with cash.” I have heard this argument many times, and Robert and Katy’s testimony (as well as many others) reveals it is not true. I have watched young and old people alike, inside and outside my church, purchase homes without mortgages. Here are three points of advice to help you do the same.

We have friends who lived in a basement until they could buy their first home with cash. Some other friends lived in a two-bedroom rental with seven children. Did these situations involve sacrifice and living modestly? Definitely. But how good do you think these people feel now as they live in their homes with no debt?

When I talk about buying a home with cash, it might be more accurate to say homes. Who says you need to live in your dream home in your twenties or thirties? A better approach is to purchase a smaller starter home with cash and save up for your next home. Then sell your starter home, which is hopefully worth more than when you bought it, and use that money, along with the money you’ve saved up, to purchase your next home. As your family and income grow, so does your home.

Two Pieces of Advice If You Decide to Purchase a Mortgage

If, for whatever reason, you still decide to go ahead with a mortgage, let me offer you two points of advice.

Real estate agents and loan officers want you to sign for the most amount of money. This has left people with much larger mortgages than they can afford simply because they were told they “qualified.” They were locked into high payments that paralyzed them for decades, leaving them unable to save, be generous, or prepare for emergencies. A much wiser approach is a smaller mortgage that can be paid off faster and easier.

Second, Choose a 15-Year Versus a 30-Year Mortgage

There are many benefits to a 15-year versus a 30-year mortgage:

The only downside to a 15-year mortgage is larger monthly payments, but most people would be surprised to learn they’re not that much larger. For example:

Trust God to Help You Pay Off Your Debt, Including Your Mortgage

Let me conclude with this: Don’t delay getting out of debt. Dedicate yourself to making changes that will put you on the road to freedom from bondage. In the following chapter, we will discuss how we can eliminate debt given time, wisdom, and sacrifice. But for now, let me leave you with the following encouragement.

The battle to become debt-free is fought in the heart because this is where we’re tempted to be selfish and covetous. The Lord can enable you to resist these temptations, giving you the needed selflessness and contentment. Believe He wants to help you: “Commit to the LORD whatever you do, and he will establish your plans” (Proverbs 16:3).

If you are a Christian, you are God’s child, and just like earthly parents want to see their children manage their finances well, our heavenly Father wants to see us manage our finances well. Assuming God wants you to be debt-free, He will equip you to reach that wonderful goal.

PrevPreviousFirst Sit Down and Count the Cost, So You Don’t Start and Then Stop (Luke 14:28-35)
NextTax Collectors and Sinners Draw Near to Jesus (Luke 15:1 and Haggai 2:10-13)Next