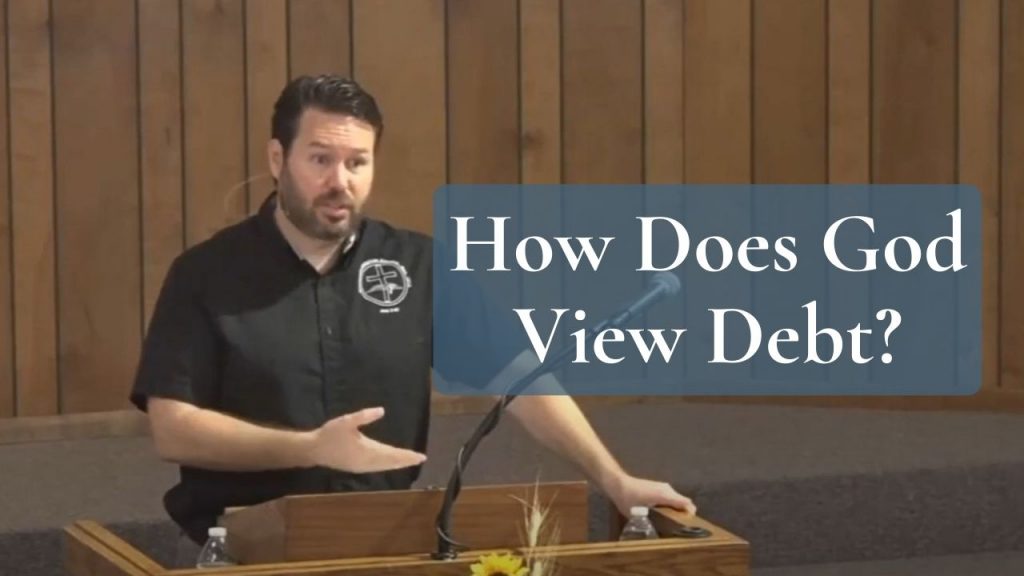 How Does God View Debt?

How does God view debt? First, let me share a story that illustrates the world’s view of debt…

A man came home with a fancy new car. His wife asked, “Why did you buy that? We can’t afford a new car, and there was nothing wrong with our old car.”

The man answered, “Our old car needed a new battery.”

His wife replied, “Then why didn’t you just buy a new battery?”

Many people can relate to this man. We think debt is a blessing because it allows us to buy things with money we don’t have. Read on to learn how God views debt.

Table of Contents for How Does God View Debt?

Just to let you know ahead of time, you might have more trouble with this chapter than any other in this book. Is it because avoiding debt is more difficult than obeying the other teachings in the book? No, not at all. In fact, giving is probably more difficult for many people than avoiding debt.

You might have more trouble with this chapter because the principles in it are so contrary to the world’s approach to money. For example, if I tell you it is important to give, save, and plan for retirement, you can find plenty of non-Christians who agree. But if I tell you to avoid debt, you can find plenty of financial advisors who will disagree and tell you that not only is debt acceptable, it is necessary and beneficial.

I will be the first to say that we should consider the counsel of financial advisors. When I do counseling, I have recommended people visit them. But let me ask you this before we go any further: Whose counsel should we value the most? Whose instruction should trump all others? God’s!

The question is not “What makes the most sense financially?” or “What do financial advisors recommend?” The question is, “What does God want?” Your Finances God’s Way received its title because it is about managing finances the way God wants, and the Bible tells us how to do things God’s way. Walking by faith means obeying God when it doesn’t appear to make sense or goes against the counsel of others. As Peter said, “We ought to obey God rather than men” (Acts 5:29). So what does God say about debt?

What is God’s View of Debt?

To learn the Bible’s teaching on debt, we must understand the difference between law and wisdom literature. The law (think Leviticus) contains commands forbidding sin, while wisdom (think Proverbs) contains principles that help us navigate through life. Let’s consider what the law and then wisdom literature have to say about debt.

What Does the Law Say about Debt?

The law does not condemn lending and borrowing. Instead, it condemns usury (exorbitant interest) and promotes generosity:

The point to notice is debt is not a sin because the law does not forbid it.

Wisdom literature also discusses lending and borrowing: “O LORD, who shall sojourn in your tent? Who shall dwell on your holy hill? He who…does not put out his money at interest… The wicked borrows but does not pay back, but the righteous…is ever lending generously” (Psalm 15:1-2, 5; 37:21, 26 ESV). Jesus is “the wisdom of God” (1 Corinthians 1:24, see also verse 30 and Colossians 2:3), so His words also tell us what wisdom says about debt: “Give to him who asks you, and from him who wants to borrow from you do not turn away” (Matthew 5:42). We see (1) lending and borrowing aren’t discouraged, (2) usury and failing to pay what’s owed are condemned, and (3) generosity is praised.

Up to this point, debt hasn’t sounded bad. But now we must consider one of the most well-known financial verses in the Bible: “The rich rules over the poor, and the borrower is the slave of the lender” (Proverbs 22:7 ESV). How do we understand debt sounding acceptable elsewhere, but unacceptable now? Combining the teaching on debt from the law and wisdom literature, we find the biblical balance is this: Because debt is not forbidden in the law it is not necessarily sinful, but because wisdom warns against it, we are wise to try to avoid it. The danger is debt makes us slaves to the one we owe money to. If we’re going to be slaves of anything, we should be “slaves of righteousness…so now present your members as slaves to righteousness [and]…slaves of God” (Romans 6:18, 19, 22).

Proverbs 22:7 is a cautionary alert to, as much as possible, not make someone else our master. Some people in debt feel enslaved to creditors. They dread going to the mailbox because they’re afraid of receiving another bill they can’t afford—they don’t know how they’re going to pay their master:

What does God have to say about the impact of debt on His people? In the Old Testament world if you couldn’t pay your debt on time you became the slave of the lender until you worked off your debt. In our day, if you borrow money you become the lender’s slave by giving much or most of your income back to the lender.

Even Churches Can Be Wrong About Debt

The biggest threat to viewing debt biblically might not be the world or financial advisors. Sadly, it might be churches! We shouldn’t be surprised when the world acts like debt is a blessing, but we should be surprised when churches do. I don’t like to criticize churches, but I feel obligated to do so because I fear you could read this chapter and think, We shouldn’t worry about debt, because I remember when that church went into debt. Churches aren’t the standard. They don’t always do what’s right.

It is sad when churches go into debt to supposedly accomplish the Lord’s work, when the same Lord they’re claiming to serve might condemn the debt they’re embracing. This often happens when churches get huge loans for buildings, which is an ironic situation. They want a building to worship the Lord in, but that same Lord warns against the debt they embraced to purchase the building. As Jesus said, “God is Spirit, and those who worship Him must worship in spirit and truth.” We must worship God according to the truth, which means worshiping Him in according to the truth in His Word.

The situation is made worse when churches justify their actions by saying, “The Lord led us to do this.” As soon as people attach God to something, nobody can disagree because then it would be disagreeing with God. But if God did not lead the church leaders to go into debt, then how bad is it to claim He did?

If a church goes into debt but struggles financially, the leadership often turns to the congregation and pleads (or guilts) the people into giving more money for the cause God supposedly wanted. Perhaps the pastor will even rebuke the people for not giving more. But what if it was the church leadership’s fault for acting outside God’s will in taking on the debt?

When the leadership says, “The Lord led us to do this” but they don’t have the money to continue the work they claim God wanted, God looks bad—He called His people to do something, but then didn’t give them what they needed to do it. He led His people to step out in faith but didn’t honor their faith.

Hudson Taylor was a missionary and the founder of the China Inland Mission. He said, “God’s work done in God’s way will never lack God’s supply.” This is true, but when church leadership say it was God’s will to get a building loan and then can’t afford the payments, they make God’s work appears to lack God’s supply. God looks unfaithful and unable to be trusted.

Christians must keep in mind that churches are led by fallible men who do not always make the best decisions. While I would like to be able to encourage you to look at what churches do and follow the examples of pastors and elders, the standard is not what men do. The standard is the Bible.

Debt Is Your Enemy Versus Your Friend

Let me first say that people aren’t always in debt for bad reasons. Some situations put people in debt against their wishes. There could be health issues that cause bills to pile up, a job loss and accompanying inability to pay expenses, or an unforeseen accident that drains emergency funds. People experiencing such circumstances should not feel condemned by this chapter.

What’s important to note here is that the above examples are all situations outside of people’s control. They didn’t invite the debt into their lives. Sadly, when most people are in debt, it was completely within their control—it was their choice. They put themselves in debt when they gave in to sins such as covetousness, discontentment, materialism, or self-entitlement.

You might read this chapter and think I’m being judgmental or harsh, especially if you have been taught that debt is a blessing. The truth is that I’m trying to help you! As a pastor, I have watched debt cause enough problems that it would be unloving of me not to warn you. Please hear me clearly: Debt is not your friend!

Think about this logically: If God warns us about something in His Word, how often could it be his will to act against that warning? Not often! If Scripture cautions us about something, how cautious must we be about allowing it into our lives? If we answer these questions honestly, we must approach embracing debt with great apprehension.