We homeschool our children, taking them through Teach Your Child to Read in 100 Easy Lessons when they’re around four. We’ve been pleased with the book, including the way the instruction is presented like a script. The words Katie is supposed to say are in red, and our child’s responses are in black. There’s a response provided if a child answers correctly, and a different response if a child answers incorrectly.

“Don’t deviate from the script!”

When I taught elementary school, I was taught a very similar program, called Corrective Reading. I remember thinking at the training, “Anyone could do this!” One of the most common instructions they told us was, “Don’t deviate from the script.”

Unfortunately, when I went back to the classroom to teach my own students there were times I completely disregarded the instruction I was given:

Here’s what I noticed very quickly:

If I had to say why I deviated from the script, I believe the answer is obvious. I thought I knew better than the author.

I can’t help seeing the similarities with Scripture. God’s Word is a perfect script for us to follow in our lives, families, marriages, churches, etc. When we deviate from the script – or Scripture – we end up having problems.

We don’t know better than the Author 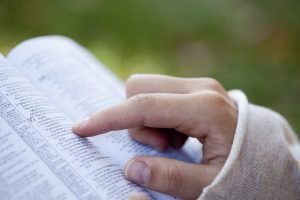 The Bible has to be approached with an amount of faith. I don’t mean the kind of faith that says the Bible is the Word of God. Most Christians acknowledge this without hesitation. I mean the kind of faith that says, “God knows best. Even if I don’t understand, I’m still going to obey.” We talk about “walking by faith” and heading to a foreign country as a missionary comes to mind, but few find ourselves in that situation. The daily way we walk by faith is by submitting to Scripture when it doesn’t make sense, or more strongly, we disagree.

There are areas of Scripture that I find hard to accept. One example is the doctrine of eternal punishment. Hell is not what I would imagine as a fair or just punishment even for a lifetime of wickedness. But I absolutely believe in hell, defend it, and teach about it from behind the pulpit. Revelation 19:2 says, “True and righteous are God’s judgments.” Just because something doesn’t make sense to me, doesn’t mean it’s wrong. It simply means in my finite mind I can’t fathom the wisdom of an infinite God.

Someone might be quick to say, “Doesn’t that show a mindlessness to go along with something you don’t understand?” Actually, I think it reveals:

If God’s Word becomes a book we treat like a buffet – picking what we like and ignoring what we don’t – it loses its power in our lives. The need to follow the Script is absolutely essential.

Discuss: What parts of Scripture have you found to accept? How have you encouraged yourself to obey?

PrevPreviousWhat Does (and Doesn’t) It Mean to “Be Filled with the Spirit”?
NextTop Three Things I Learned From My Dad, John LaPierreNext