You are here: Home / Bible Commentary / Few Are Chosen 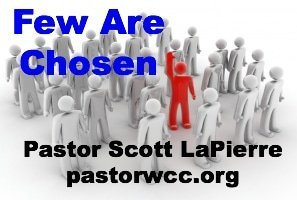 During yesterday’s sermon I discussed The Parable of the Wedding Feast, stopping right before Matthew 22:14 which says, “Many are called, but few are chosen.” That verse doesn’t seem to fit though; it seems like it should read, “Many are called, but few respond” because the parable is primarily about people unwilling to accept the King’s invitation (aka call to salvation).

The many called are those who hear the Gospel. It’s the second step in God’s wonderful plan of redemption: (1) Whom He predestined, (2) these He also called; (3) whom He called, these He also justified; (4) and whom He justified, these He also glorified (Rom 8:30). The call itself takes place in Matthew 22:2-3 The kingdom of heaven is like a certain king who…sent out his servants to CALL those who were invited to the wedding. The call is to see yourself as a sinner, stop trusting in your own righteousness, embrace Jesus as Lord and Savior and receive His righteousness by grace through faith.

The balance struck in these verses is really tremendous…

In verse 3 after the call goes out it says, “they were not willing to come”; it’s not that they weren’t able to come it’s that they weren’t willing to come. The call goes out again in verse 4: “Again, [the King] sent out other servants, saying, “Come to the wedding.” But in verses 5 and 6 it says, “They made light of it and went their ways…the rest seized his servants…and killed them.” This group’s rejection is even worse than the first as you again see the people choosing not to come, choosing instead to reject the wonderful love and grace of the King. Then after all that you see that they weren’t “chosen”, looking to the sovereignty of God in choosing the elect.